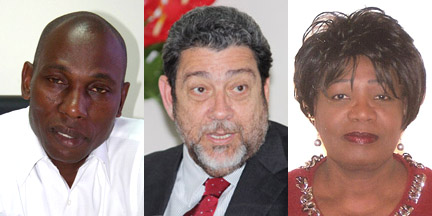 “I am convinced that the Prime Minister’s presentation has made our work superfluous,” Thomas wrote in his resignation letter to chair of the committee, former culture minister Rene Baptiste.

“His (Gonsalves’) talk was a good one and added much to the debate, but it has irreparably coloured and influence the debate particularly since PM Gonsalves is the head of cabinet, which makes the final decision as to who our next hero or heroes will be,” Thomas wrote.

The resignation came in the wake of Gonsalves’ lecture on the topic “The Making of a National Hero: The Law and Practice in St. Vincent and the Grenadines”, a large section of which was dedicated to making a case for this country’s first prime minister, Milton Cato, to be made a national hero.

The lecture was the third in a series organised by the University of the West Indies Open Campus.

Gonsalves was initially scheduled to speak on the topic “National Hero Status: Consideration for McIntosh, Joshua and Cato”, but changed theme amidst protest from former parliamentarian Parnel Campbell Q.C. and social commentator Renwick Rose, among others, who argued that Gonsalves, as head of the Cabinet, should not advocate for any person(s) in particular to be made heroes.

But critics of the prime minister also say that while he changed the topic of the lecture, he still presented his arguments for Cato as a national hero, a point Thomas made in his resignation letter.

They have also said that the move to elevate Cato to national hero is a political one, intended to please the Labourite segment of the ruling Unity Labour Party ahead of the next general elections, constitutionally due in 2015.

But Gonsalves, who has criticised Cato in his speeches and writings in the past, has repeatedly argued that while he is head of the Cabinet, he is entitled to an opinion and that no candidate for national hero should be disqualified because of political calculations.

Thomas, in his resignation letter, said he “sat in the audience and eagerly wanted to challenge [and] rebut many of the points made by the PM as to why former Prime Minister Milton Cato should get serious consideration for the honour of national hero.

“But I kept my silence for the simplest of reasons: as a member of the National Heroes Committee I thought it would have been inappropriate and wrong for me to support or oppose any nominee.

“How then could it be right for the Prime Minister Gonsalves as the final arbiter of the selection process to weigh in on the debate with what was essentially a determined lobby for Robert Milton Cato.

“For the foregoing reasons I find no useful purpose in me remaining on the National Heroes Committee. I enjoyed working with you and the prestigious group of individuals who make up the committee and wish you well as you continue your work,” Thomas wrote to Baptiste.