Police spokesman says I-Witness News is not a media entity 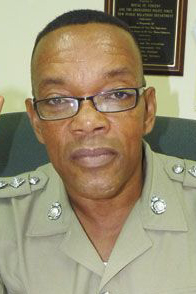 Nicholls has repeatedly refused to distribute police public information notices (PINs) to the not-for-profit public service news and current affairs blog that has been operating since 2009.

The publicist, who heads the Police Public Relations Department, on May 6 instructed journalist Kenton X. Chance, who operates IWN, to again write to Commissioner of Police, Keith Miller, seeking permission for I-Witness News to be included among recipients of PINs from the police department.

Chance had gone to Nicholls’ office seeking information about a number of homicides in this country recently.

Nicholls said that his office had received from IWN several emails asking that it be included among the police’s recipients of PINs.

He said that he had forwarded the emails to the police chief and that he said that IWN is not a media entity and should not receive PINs from the department.

Miller has in the past granted interviews to Chance and IWN.

Nicholls further said that it is the policy of his office not to send PINs to individual media practitioners and therefore independent journalists will not be included among recipients of the PINs.

The police spokesman said that since Chance is not associated with any media entity in SVG, his office has no way to verify that Chance is in fact a bona fide journalist.

But Chance — who has a degree in journalism and mass communication and has worked in the media internationally, regionally and locally — and Nicholls have attended media training together.

And, as recently as in April, Chance received via his personal email — the only means through which he had received such communiqués — PINs from Nicholls’ department and Nicholls himself has in the past given information, on the record, to Chance.

But Nicholls said he did not know that PINs from his office were being sent to Chance and that he will “correct that”.

Further, IWN had credited the police public relations department for its PINs when they are published without major rewrite — something that some of the nation’s newspapers have not done.

The police department’s policy exists even as the office of Prime Minister Dr. Ralph Gonsalves, who is also Minister of National Security, invites IWN to its media briefings and circulates its PINs to the media entity.

Further, this police policy of withholding PINs from individual media practitioners exists even as the Force has attracted a trained communications professional in the person of Insp. Hawkins Nanton, who has a master’s degree in communications and more than a decade of experience as a journalist and news editor.

But while the police department refuses to circulate its PINs to new media, such as blogs like IWN, it does not have any dissemination entity of its own — such as a website — and relies on traditional media for the dissemination of its information.