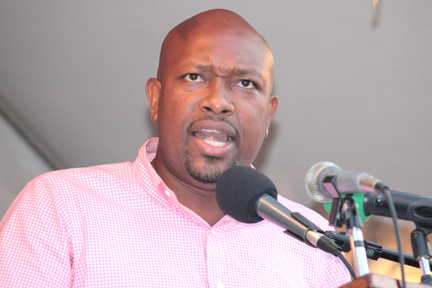 KINGSTOWN, St. Vincent, May 22, IWN – There is often a lot of talk locally about the size of the food import bill.

But Minister of Agriculture, Saboto Caesar, also wants some focus on the national food consumption bill.

Caesar, speaking at the Fisherman’s Day Rally at Calliaqua on Monday, lauded “the valiant effort” of the nation’s fisherfolk “who go to sea, day by day, to feed the nation”.

“And it is time for us, as a nation, not only to look at the food import bill but to look at what is the national food consumption bill. Because, when we look at the national food consumption bill, we will be able to take our imports and better appreciation [for] the hard work and the toil of our farmers, who go to the field on a daily basis, and of our fishermen who go to the seas on a daily basis to build this blessed country,” Caesar said.

He further said the Fisheries Division will work hard to ensure it meets the requisite standard for the export of seafood to the European Union.

“It is very important as we expand in term of the technology that we … also find the markets internationally and that we can meet the requisite standard for the European market, and that is being worked on, as we speak,” Caesar further said.

This country has not met the standard required to export seafood to the EU for more than a decade.

The minister also spoke of the lionfish, a venomous, voracious, invasive species that is a threat to local fish stocks.

He said he ate lionfish for the first time earlier that day.

“And I enjoyed the lionfish. And I must say, even though it is a threat, in many islands in the Caribbean, we are making a significant opportunity out of this threat.”

Caesar also encouraged fishers’ cooperatives to work hard as the nation continues to build capacity, adding that is it hard for individual fisherfolk to do it on their own and that the Food and Agricultural Organisation last year recognised the importance of cooperatives.

“And I know, over the years, there has been a high level of distrust in cooperatives. And I see some of the fishermen here giving me a nod of approval. But I want to say to you this evening that, as we go forward, the cooperatives must continue to play a very integral role.”

Caesar noted that the Government established a $6 million credit facility a few years ago.

“It was, however, under utilised. And that is very instructive. The time has come for us now to not only look inwards but we have to look to attract many foreign direct investors into our country to assist us to develop our fisheries sub-sector,” he said.

Caesar added that over the last 12 years, the Government has done much work in developing the fisheries infrastructure.

He further announced that an investor from Denmark is interested in coming to invest in the fisheries subsector.