Argyle airport is not cure all for nation’s development –Eustace 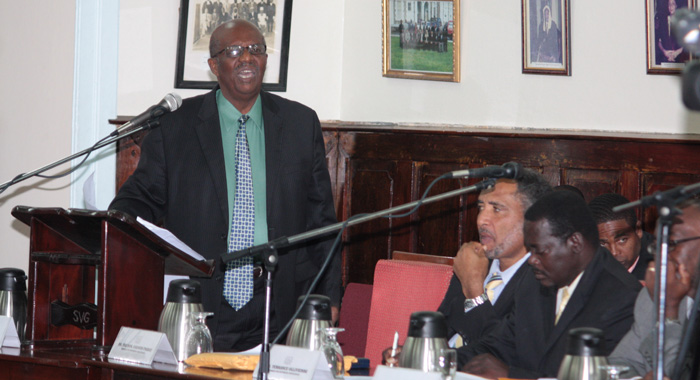 Opposition Leader, Arnhim Eustace, says when EC$208 million is being allocated to the airport at the neglect of other areas, the Government is barking up the wrong tree. (IWN photo)

KINGSTOWN — Opposition Leader Arnhim Eustace on Thursday likened the Government’s approach to building the Argyle international airport to a one-lane track on which there are 12 runners.

“… and therefore, nobody can pass the airport. …

All the others must wait,” he said, as he accused the Government of allocating significant resources to the EC$6752 million (EC$1 = US$0.37) project while neglecting other important areas.

Lawmakers must give permission for EC$148.7 million of the EC$208 million to be borrowed.

Eustace told Parliament that Opposition legislators were elected to do a job and that they would continue to do it.

He said that while some types of comments about the airport are deemed “unpatriotic”, Opposition lawmakers will continue to speak, because they have an obligation to speak about the whole development of the country.

He said there are many areas in which the nation is “lacking”.

The airport, Eustace said, is not the “panacea for our development”.

He said decisions must be made in the context of the economic reality and added that the bill will increase the 2013 Budget from EC$799 million to EC$1 billion.

Eustace further said the Government has taken a policy position to reduce spending on some items, “some of which are vital”.

“We are not to comment? We are not to have any way about that? Well, we have to; it is our job to do so. We can’t always see eye-to-eye and agree with you,” Eustace said in response to Prime Minister Dr. Ralph Gonsalves’ presentation of the bill.

“It is as if nothing else matters. All of us know there are debt implications,” Eustace said, noting Moody’s Investor Services’ recent call for the devaluation of the Eastern Caribbean Dollar, which, he said, he opposes.

He said that when so much is being allocated to one project to the neglect of other areas, the Government is “barking up the wrong tree”.

Eustace said he understands what the Prime says the money is to be used for.

“But I also know that firms are laying off people…” Eustace said, adding that the Government, because of limited resources, has not appointed people, including teachers, who qualify for appointment.

“Things are indeed difficult, brought on, in part, by your own mismanagement,” Eustace said in reference to Gonsalves, who is also minister of finance.

Eustace said he has examined the Government course of action and asked what is being done to stimulate the economy.

He further said when the government can find EC$208 million only for the airport, he wonders about the farmers

“But they contribute to stimulating growth in our economy. The whole agricultural sector contributes to that,” Eustace said, and suggested that EC$10 million could have been spent on capital projects to “bring back that industry”.

“And I say that strategy needs to be re-examined. But the minute you raise a question [it] is that you don’t want the airport. You are not supposed to raise any questions. … I am urging the government to take a more holistic approach to the development of the economy,” Eustace further said as he called on the government to “deal with the scourge of unemployment”.