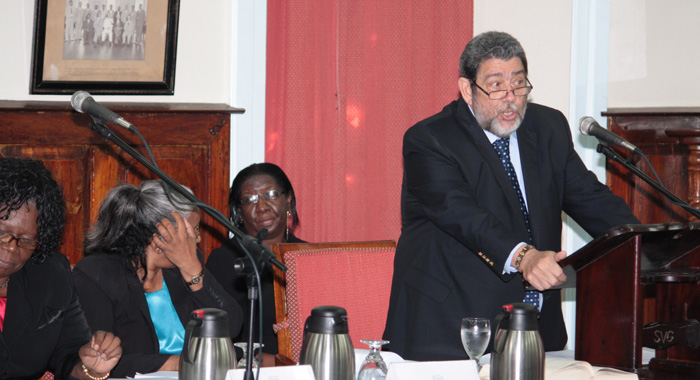 Eustace, speaking on his weekly radio programme Monday said he was “shocked” by the bill.

“I was so shocked on seeing this, I thought I saw 208,000 [dollars]. I found the thing unbelievable so I started to look at the various items that could make up all this amount of money,” he said,

But Gonsalves said Thursday he had indicated that he would have to come to Parliament for approval to seek loans to complete the EC$652 million (EC$1 = US$0.37) project, the largest in the nation’s history.

The Prime Minister reminded lawmakers that just before the December 2010 general elections, Eustace told a press conference his New Democratic Party (NDP) would complete the airport.

But Gonsalves said that notwithstanding that pronouncement, the Opposition has, “at every turn”, put obstacles in the way of the project.

“I want to see them matching their words with their deeds today,” he said, adding that the construction of the airport cannot be supported “with bottle stopper”.

“You have to support it with money, and the money had to be appropriated,” said Gonsalves, who is also Minister of Finance.

The Government has to seek Parliament’s permission to borrow EC$148.7 million of the EC$208 million contained in the bill.

Other amounts are to be raised by the sale of state assets, including shares in the Bank of St. Vincent and the Grenadines, for which no parliamentary approval is needed.

“That is what good governance is about. … I had to come here and get permission and it is the permission which opens the tap to the water,” he said.

He said that under the former NDP administration, Supplementary Appropriations in excess of the sum permitted by law were not brought to Parliament for approval.

He further said that no Finance Committee meetings were held in relations to supplementary bills, as the law requires.

Meanwhile, Gonsalves said it is the policy of his government to finance the airport by funding from different sources and the people gave a mandate in 2001, 2005, and 2010.

He said the electorate would reward his government with a fourth consecutive term in office when the airport is completed.

“That is what sticks in the crop of the opposition,” he said.

General elections are constitutionally due in 2015 and the airport is expected to become operational in about 18 months.

Gonsalves further said that contrary to Eustace’s media statements, each of the loans that make up the EC$148.7 million is a soft loan

“He made a wrong statement there, a wrong assertion,” Gonsalves said.

But Gonsalves noted that when he came to office in 2001, there was a debt of EC$180 million for the Ottley Hall Marina, which was worth EC$16 million.

He further said that when Eustace was finance minister, he paid EC$19 million to service that loan.

“So I want to make that point first,” Gonsalves said.

He further explained that EC$1.3 million of the EC$3.5 million for debt servicing contained in the bill, is for monies from the Eastern Caribbean Central Bank for which there was an under-provision in the 2013 Estimates

“And I am simply correcting that,” he said.