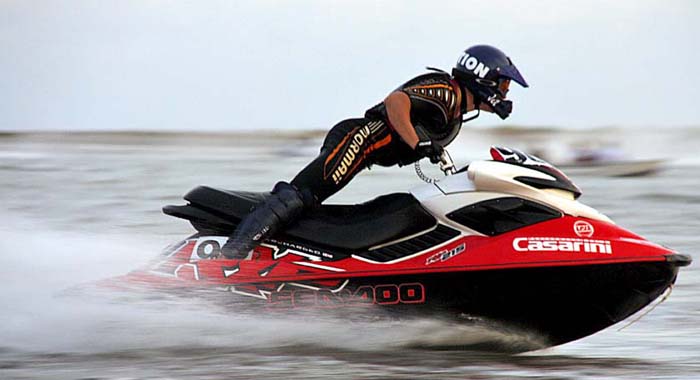 The Government is considering lifting the ban on jet skis here. (internet photo)

KINGSTOWN — The Hotel and Tourism Association (HTA) will meet today — Thursday — to formulate its response as the Government makes its second move since 2009 to lift the ban on jet skis.

Although covered under the Power Craft Act, the importation of jet skis is currently prohibited under the Supplies Control Act.

But the latest attempt to lift the ban is expected to meet with the same strong resistance as it did four years ago.

Some stakeholders are questioning the move in light of other countries’ efforts to reduce the number of personal watercrafts (PWC) in their jurisdictions and the negative impact on their tourism product.

“We’ve put a feeder out to everybody [to] give a feedback, what they think, and then I will make a statement based on that,” Kim Halbich, president of the HTA told I-Witness News on Tuesday.

But John West, president of the St. Vincent and the Grenadines Recreational Marine Association (SVGRMA), said the entire membership of his group “strongly supports that there be no legislative changes for the benefit of all that could be affected, our tourism industry and environment.”

The SVGRMA’s position was outlined in a letter on Tuesday to the Permanent Secretary in the Ministry of Tourism that same day outlining his group’s position on the move.

For sports and patrol

The Ministry of Tourism, in a letter sent to the Bequia Tourism Association and obtained by I-Witness News, said it was “considering the introduction of jet skis as a water sport activity and also to facilitate patrol of the waters throughout the destination”.

The ministry said it “is cognizant of the importance of collaborating with stakeholders to ensure that all the necessary parameters are established for the smooth and safe operation of this craft”.

It encouraged feedback or recommendations with respect to the introduction of this craft, inclusive of designated beaches, speed limit — operational distance from the shore, and safety guidelines.

West, in his response jet skis “are simply bad for the environment, bad for those wanting to safely swim, snorkel and dive in our waters and enjoy the peace and quiet of our beaches and anchorages.

“They are dangerous and statistically account for in excess of three times more than other types of serious accidents and deaths of users of powered watercrafts,” he further said.

He said that even in destinations with strict legislation and actual enforcement of those laws, accidents and fatalities occur.

“Our current legislation has served us well for many years and those that have enjoyed our waters, our beaches and anchorages very much appreciate the non- existence of Jet Skis,” he said.

Meanwhile, the response from the yachting sector came through a nine-page letter from Sally Erdle, editor of Caribbean Compass Publishing, a yachting magazine.

Erdle referred to five comprehensive surveys of visitors to the Eastern Caribbean.

“Many of the questions included in every Readers’ Survey deal with factors that make a yachting destination desirable or not desirable.

The document outlines “the eight most pertinent reasons given by our repeat yachting visitors for keeping the existing prohibition in place”, namely:

“The SVG Marine Tourism Policy has been developed in keeping with Government’s stated vision for the development of tourism: ‘To improve the quality of the tourism product and allow it to become more competitive, whilst at the same time minimizing the negative environmental and social impacts.’

“By all accounts, the introduction of jet skis presents not only a high risk of negative environmental impact and physical injury to persons, but in terms of tourism it also threatens the alienation of the high-priority yachting market segment,” Erdle wrote.