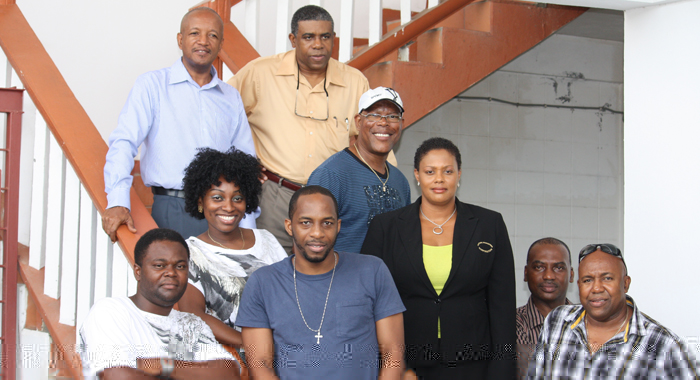 TOUCH has recruited some leading young Vincentian artistes as it regroups for Vincy Mas 2013. (IWN photo)

KINGSTOWN — TOUCH, the local band that dominated the soca scene through the late 1990s, is regrouping for Vincy Mas 2013, one year before the outfit turns 30 years old.

It is the third time that the band is regrouping after it went dormant about 15 years ago.

At a press conference on Tuesday, TOUCH and Friends announced that it will release two songs this year and said it will be available for performances.

The band played at the press conference a recording of “Do What You Like”, a song written by Bryan Alexander and geared towards the international market.

Alexander described the song as “one of the better” that the band has ever produced.

But the band said that its fans and music lovers generally would have to wait for longer yet before the release of “I’ve Got It”, which is written by Ifil Shortte and produced for the local market.

Gideon James, a vocalist with TOUCH, said that every carnival over the past 10 years, TOUCH lovers have inquired about when the band would regroup.

“We always thought about it but this year we really have to do something,” he said.

The band is partnering with the National Broadcasting Corporation to organise a t-shirt band — “Extreme” — on Carnival Monday.

But while Touch is returning to a markedly different soca scene, the band said it still has something to offer.

Among the “friends of TOUCH” singing with the group this year are Calypso, Soca and raga soca artiste, Skarpyan, and vocalist Aretha Shallow

A band member pointed to the incorporation of these younger artistes as evidence of its evolution.

“We know that music evolves and we have moved with the time. I think we actually ushered in an era and kept it changing and kept valid during that and the fact that we recognise artistes like “Skarpyan who is a generation or two beyond our initial coming out is testimony to TOUCH’s own youthful existence. We might have grey hairs but we are still young in mind and heart. And we are open to lot of new things, musically especially,” the band member said.

Meanwhile, Murray Heights Hotel will be the locale of Touch’s Carnival fete.

“I want to remind us that TOUCH is a very well-known brand in St. Vincent and the Grenadines and the Caribbean,” Murray Bullock, owner of the hotel said.

“As a matter of fact, I don’t even know that the members of TOUCH themselves recognise how important and valuable the brand TOUCH is, and that it has a significant amount of goodwill.

“And that is a quantifiable asset in terms of in business terms,” said Bullock who mentioned that he was pleased to be associated with the outfit.