Man jailed for 40 years for killing girlfriend, attempting to kill her friend 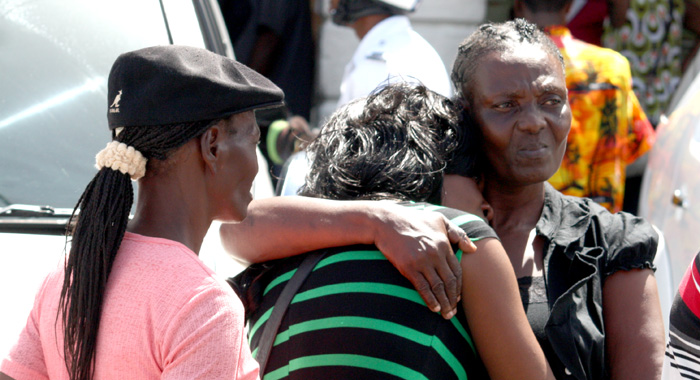 The mother of murder victim Stephanie Daniel (centre) consoles another of her daughters outside the High Court in Kingstown on Friday, June 7, 2013. (IWN photo)

KINGSTOWN — Aubrey Calvert Wilson, 43, of Greiggs, was on Friday jailed for 40 years for murdering his girlfriend and attempting to kill one of her friends in 2011.

But the mother of the woman whom Wilson killed, told I-Witness News on Friday that 25 years is not enough punishment for the loss of her “innocent” daughter.

Wilson stabbed and killed Stephanie Daniel, 33, then tried to kill Vasilca Maloney at Greiggs on August 14, 2011.

He was convicted on both offences in March, but sentencing was deferred to Friday, pending a Social Inquiry Report.

Caseworker Camille McIntosh told the court that Wilson was a good candidate for reformation.

And, Justice Wesley James sent the convicted man to jail for 25 years on the murder charge, and 15 years for attempted murder.

Director of Prosecutions, Colin Williams, who represented the Crown, had asked for life imprisonment.

And Daniel’s murder said she would have been pleased had the judge granted the prosecutors request.

“I know they don’t sentence anyone to hang but I would have still preferred he got life imprisonment,” she told I-Witness News.

She said that since the death of her daughter two years ago, “I can’t even catch myself. … It is the mercy of God has me standing on my feet,” said the grandmother who takes care of two of her deceased daughter’s three children.

Meanwhile, the DPP told I-Witness News that while the mother is displeased, “Judges are the best equipped persons to make a determination on sentence.”

He noted that the convicted man could have gotten a sentence ranging from a term of years to life imprisonment.

“Maybe if [I were a judge] I would have said 30 years. What’s the difference between 30 and 25 years? He (the judge) has more experience, far more knowledge than me in the realm of sentencing,” the chief prosecutor further told I-Witness News.

The prosecutor further said that even if the convicted man was sentenced to life imprisonment he would still be open to reviews by the Committee of Mercy.

“The fact of the matter is, what is the aim of sentencing? There are certain principles then: punishment, deterrence, prevention, rehabilitation. While the murder itself was brutal and deservers severe reprimand, the social inquiry report also indicated that he is a good candidate for reform. So, you have to balance things and the judge is best placed to determine where justice lies,” he said.

7 replies on “Man jailed for 40 years for killing girlfriend, attempting to kill her friend”