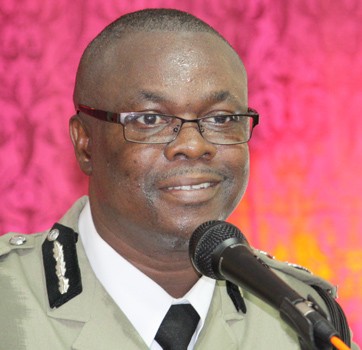 But when two callers asked Miller on a radio programme Wednesday night if the money had been repaid, Miller had a curious answer:

“… I want that caller to tell me who I owed? Who I owed for me to pay back?” Miller said.

The host of the programme, on Star Radio, owned by Gonsalves’ Unity Labour Party, had initially told Miller he could answer the question later in the show.

But the police chief was confronted with the question again when the caller telephoned a second time.

Searchlight newspaper last year reported on the scam, in which Miller and other Government officials were fooled into believing that they were sending money for three cops, two from the Anti-Trafficking Unit, and Miller, to attend a conference on human trafficking, in Dakar, Senegal, West Africa in October.

On three occasions, money was wired via Western Union Money Transfer to persons in Senegal, posing as conference organisers.

In addition to the EC$9,439.12 sent to Senegal, EC$465 was paid to Western Union for sending charges, the newspaper reported.

The Police Force and the crooks communicated via emails and many of the communiqués from Africa were riddled with basic grammatical errors.

Miller is said to have become suspicious after the organiser made a fourth request for money. He then contacted the United States Embassy in Barbados, which told him that he had been scammed.

Gonsalves, who is Minister of Finance and National Security, subsequently told the newspaper that Miller had accepted responsibility for the development.

“I called the Commissioner. I asked him about this matter; he acknowledged right away that he is responsible, said straight off that he will make good the loss,” Searchlight quoted Gonsalves as saying last November.

“I am not sure how he will pay it, whether one-off or in instalments, but that is a matter between him and the Accounting Officer, who is Mr. [Godfred] Pompey, the Permanent Secretary [in the Ministry of National Security],” the newspaper further quoted Gonsalves as saying.

But when callers asked Miller Wednesday night if he had repaid the money, he responded by asking who he owed.

“There is a caller who has an interest in knowing whether I paid back money. But firstly, I have to know where I was responsible for paying back monies — who I owed. So, before I answer that question, I want that caller to tell me who I owed. Who I owed for me to pay back? Because you cannot pay back money if you are not owing money.

“You see, sometimes, people have a tendency, they like to talk what they do not know. So, I want him to tell me who I was owing. Who I am responsible for paying,” the police chief further said.

But another caller returned to the question and grilled the Commissioner of Police on the subject.

“Well, I would like to know if you paid back the money that you sent to Western Union sometime ago,” the caller said.

“That I sent to Western Union?” the police chief responded.

“You sent via Western Union to the — you know exactly what I am talking about,” the caller retorted.

“But what evidence you have that the Commissioner of Police sent money to Western Union?” Miller asked.

“It was in the newspaper, Sir.”

The newspaper report actually said that another police officer had gone to the Western Union office to conduct the transaction.

“Newspaper my — that is nonsense you are telling me about newspaper,” Miller said, seemingly losing his cool.

“… You admitted that you were scammed,” the caller, however, told the Commissioner of Police.

“I admitted that I was scammed?” the Commissioner asked.

“To whom?” the host interjected.

“The Government of St. Vincent and the Grenadines,” the caller responded.

“Now, you are putting yourself in serious trouble. Now if you are saying that I am owing the Government of St. Vincent and the Grenadines money, I can have you prove that.”

“But that wasn’t reported in the newspaper?” the caller responded.

“You can have my permission –” the Commissioner was saying as the host engaged another caller, who commented that the programme was a good one and persons wanted to disrupt it.

“This is why I would never understand the unprofessionalism that is exercised by some newspapers here, by some persons in the media,” the Commissioner further said.

Searchlight, which carried the story, is widely regarded as supportive of the Gonsalves government and is celebrated by many of the party’s supporters and spokespersons as the epitome of “responsible journalism”.

“The lawyer advised me to just relax on that. This is how far I took this matter. … I took it to my lawyer, I sought his advice to find out how far I can go, and he told me relax a bit,” Miller further said, just before the host said it was time to move to another topic.

Miller, along with police spokesman, Assistant Commissioner of Police, Jonathan Nicholls and a senior traffic officer were on the radio programme sharing police matters of public interest.