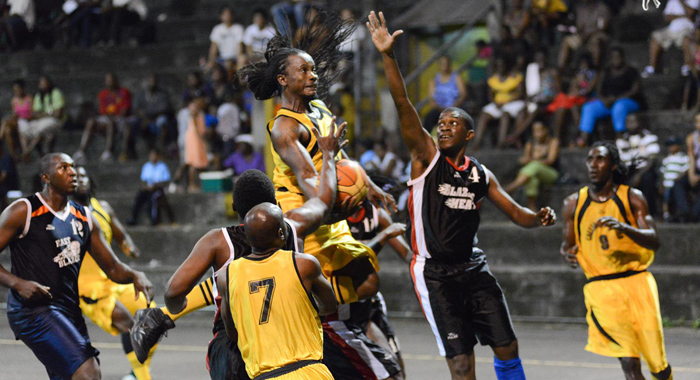 Ishama McKree of Calliaqua United attempts a basket amidst tough defence from Bequia United in the finals of the Mens Basketball Championship at the New Montrose Basketball Facility on Sunday, June 16, 2012. (Photo: Edward Newman)

Aycees Calliaqua United retained the Men’s Basketball Championship title for yet another year when they defeated Bequia United by a single point at the New Montrose Basketball Facility on Sunday.

Bequia came from behind twice, included an 8-point deficit at the end of the first quarter to bring the match to the point where two missed free throws by Shavia Farrell allowed Calliaqua to continue to its longstanding dominance of the competition.

The Grenadine team was first off the mark when Orando Blaugh scored a free throw awarded when Glenn Smith fouled him as he attempted to convert a rebound.

But Leslo McKenzie soon found the net for the Calliaqua team when he dribbled his way from the three-point line and cut along the baseline before emptying into the basket.

Sloppy passing, inaccurate shooting and poor defence dogged the Bequia team during the first quarter of the game even as McKenzie continued to hog the ball on the Calliaqua side.

And with 10 seconds remaining on the clock during the first quarter, Ishama McKree attempted a basket but was redeemed by Joseph Emmanuel who converted on the rebound to bring Calliaquia score to 21, compared to Bequia’s 13.

Calliaqua continued to dominate in the second quarter with Bequia yet to add to the tally after three minutes had elapsed.

Players attempted baskets amidst tough defence even as their teammates were wide open outside the three-point line.

Bequia found the bottom of the rim again four and half minutes into second quarter, when a two-point shot by Farrell brought the score to 15, compared to Calliaqua’s 28.

The scoring, like the selfish playing earlier on, also seemed to be contagious as a three-point shot came in quick succession, followed by a bank shot by Jonas King, which brought Bequia’s tally to 20 — 10 point less than the defending champions.

But the violations were also rolling in and Kirstin Lampkin had racked up three fouls by the time there were 3 minutes and 48 seconds left in the second quarter.

A technical foul at the end of the quarter saw Calliaqua converting two free throws to move the lead to a decisive 42 — 28.

Calliaqua began the third quarter of the game with a massive three-point shot from the right hand corner of the court.

But an attempt at inside shot later in the quarter was denied as Jonas King moved in with a powerful block that sent McKenzie’s attempt at basket flying off court, much to delight of the small crowd of spectators.

With just 36 seconds remaining on the clock and the sore 44—49 in favour of Calliaqua, Bequia called a time out.

When play resumed, Lampkin passed to high post player, Glenroy Charles, who cut along the baseline but was cut down as Michael Richards registered his third foul.

Charles missed both of the free throws and was outrebounded by Calliaqua. But Calliaqua’s possession of the ball was short-lived as Bequia breached their fast break attempt.

When Charles tried to convert, Richards again fouled him — Richards’ fourth violation for the match and the second in 30 seconds.

Charles converted one of the two free throws to bring the score at the end of the third quarter to 47—55, with Calliaqua still in the lead.

Both teams upped their game in the final quarter of the match, with Calliaqua adding just one to their tally in almost three minutes, even as Bequia was finding it difficult to poke holes in the defence.

But a series of baskets in quick succession saw Bequia narrowing the lead and Calliaqua adding to their tally even as they tried to deny Bequia further attempts at the basket.

But Calliaqua messed up when Farrell was fouled as he converted the second of the baskets that brought the score to 71-72 in favour of Calliaqua with 17.91 seconds remaining in the game.

It was then up to Farrell to make at least one of the two free throws, which could have levelled the score or win the match outright for Bequia.

But Farrell missed both of the shot as the remaining second ran out as both teams hustled for the ball.

“I was under a little pressure,” Farrell told I-Witness News in a post match interview.

“It happens so you have to move on to the next game next year,” the athlete who has been playing basketball for 11 years further said.

He, however, described this team’s performance as “lovely”.

“We came back from about 19 points down. I love the effort. I can’t complain.

Meanwhile, Randolph Williams, coach of Calliaqua United, said his team played “alright” for the first three quarters of the game.

“The fourth quarter, we kind of got lackadaisical with passing the ball, we started throwing it all over the court. And this gives incentive for another team to get back in the game, and they did get back in the game. They had the last shot of the game and they, unfortunately, missed it. So, I guess we are lucky,” he Williams told I-Witness News.

One reply on “Calliaqua maintain male basketball dominance by 1 point”