Canouan and E.T. Joshua airports were all we needed

The views expressed herein are those of the writer and do not represent the opinions or editorial position of I-Witness News.

All the political rhetoric and crap that we have had to eat for the last seven years, rammed down our throats, wedged in our ears, stuffed up our backsides, we have been lied to, conned and treated like imbecilic morons.

We have been led into mass poverty. The rich have got richer, the poor have got poorer and the middle class barely exist. We have been stuck with massive debt and loans, borrowing way beyond what a country of this size could ever be able to repay in a hundred years. Teetering on the edge of a precipice called default, unable in the future to repay our borrowings to our lenders.

Are lenders stupid? Are they not aware that there is not better than a 50 per cent chance that they will ever be repaid? We know they are not all stupid, because the British, Europeans and the Americans have refused to have anything to do with the project. Bankers such as the Marxist owned ALBA Bank, the very naive old boys Caribbean Development Bank, the raped NCB, the raped NIS fund, and even Scotia Bank, who really should know better. We have even had money from what I personally consider rubbish rogue states in return for our U.N. vote.

The thing that was the biggest deception was when we were told that there was a so-called “coalition of the willing” — supposedly a group of countries that were willing to help us, giving us cash grants, supplying free materials, free machinery and free labour. Venezuela and a number of other countries promised free money. We were promised free machinery and plant; Venezuela supposedly sent us a small initial consignment free. Unfortunately, I have my doubts even about that transaction being free. Supposedly Mexico promised to give us all the cement required for the runway, I don’t believe that now, and I never believed it when we were first told.

The majority of plant, machinery, trucks and equipment have been purchased by SVG by selling off Crown lands and taking loans to do so. The “coalition of the willing” some were only very slightly willing, most were totally unwilling, making them “THE COALITION OF THE UNWILLING”. It’s costing us close to a billion dollars and should have cost us nothing.

We were told that when the airport was finished there would be no debts left for the taxpayers; we would owe nothing. We were led to believe that we were being looked after on the strength of the Prime Minister’s personal and political friendship, his deep-rooted camaraderie with most of the world’s left wing scum. We were told that the Venezuelans were paying the wages of the Cubans — untrue; they have not paid a red cent.

We have paid so much in wages and salaries to Venezuelans and Cubans that is has just about destroyed our banking system and our workforce, destroying also our internal commercial trade, including shops, stores and services. “How?” you might ask. Well, all or the major part of that money was transmitted back to Venezuela and Cuba. It didn’t stay in this country as it would have done if the money was paid to Vincentians. Therefore, it didn’t circulate through Vincentian business. The Cubans must have believed they won the lottery every week. In Cuba they were paid less than EC$100 a week, some only EC$100 a month. Here, they were paid many times more than that which was paid to Vincentians; they got over EC$4,000 a month.

The master plan of the project was not completed until late 2009 or early 2010 — years after the work had commenced. This caused some huge mistakes, including the Cuban architect/engineer failing to notice that 30 acres was required for the cargo terminal area. 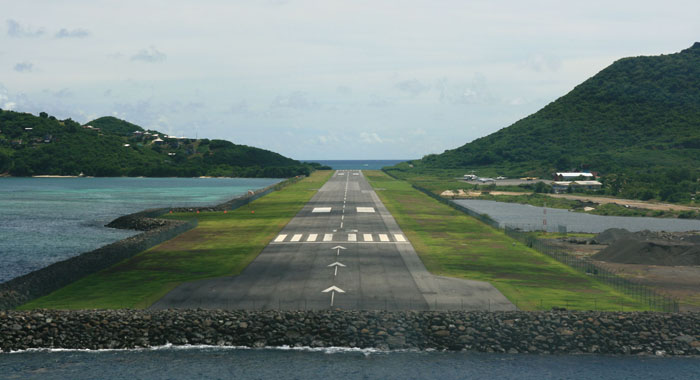 Docking an oil tanker, isn’t that a huge ship the size of a cruise liner, docking at Argyle, was he kidding us, was he joking, or was that another story put out to the media for home and Diaspora consumption.

At the same press conference, according to Matthias, “EC$36 million was still to be paid to 15 homeowners or landowners.” The figure was probably EC$100 million and approaching 70 landowners, and now in 2013 stands between 59 and 61, and they are still waiting to be paid.

He told the audience “the most recent estimate of the project is EC$589 million”.

He gave not even a hint of borrowing money, not a hint of involving the NIS. And even worse, having got all that money the IADC still failed to pay the 60 landowners for their lands. They remain unpaid in June 2013.

Canouan airport was built in the time of the NDP government in 1998. Because our PM loves personal glory, he had it extended and improved to take narrow-bodied passenger jets that carry up to 200 passengers. It was a shared project between the Italian resort owners and the ULP government in 2008.

Kelly Glass did the engineering work and cut down a hill, described by the regime as a mountain. The work was finished in 2008 opened on Sunday May 11, 2008. Since then only on a rare occasion has a 200-seat passenger aircraft landed there, the last was at Christmas 2012.

The aircraft most ideal for Canouan:

Most international route aircraft that we will get in SVG will be one or two 150 to 200-seat aircraft a day, plus a variety of local and LIAT inter-island flights, a number that could easily be accommodated at Canouan.

After all we have done at Barbados and St. Lucia, we could have started using Canouan since 2008, but I suppose that would have exposed the truth: we do not need Argyle.

LIAT could have run two aircraft as a shuttle service between Canouan and St. Vincent. All the small airline people like SVG Air, Mustique Air and others would all have been in the frame to earn a little, or even a lot, flying to the small runways on other islands.

Then sometime in the near future, the E.T. Joshua runway could have been extended seawards at the cost of US$50 million to accommodate the same aircraft. In fact all this could have been achieved at least five years ago.

Why we must ask, why has this service not been put in place at Canouan, at least during the short term? It’s because the SVG traffic is not there even for aircraft of this size, and we should question if it’s not there for Canouan will it ever be there at Argyle. But more than that, such a scheme would have no glory for the PM to bathe in, so instead we have built Argyle and sent SVG into a financial nosedive and with a final cost approaching 1.5 billion dollars when we could have achieved exactly what we want and need at under $100 million.

The scheme at Argyle is a scheme of grandeur, a scheme that satisfies one man’s massive ego and political indoctrination, a scheme that is designed to make him feel good and look wonderful to his socialist peers, a scheme to fulfil the wet dreams of a left wing political scientist. A scheme that I am sure will become known as “Red Ralph’s Folly”.

CANOUAN AND E.T.JOSHUA AIRPORTS WERE ALL WE EVER NEEDED,

WE HAVE JUST WASTED MORE THAN A BILLION EC DOLLARS.

Shortly a follow up to this will be an expose of what the NDP had planned for an airport, an airport project, which was abandoned after Gonsalves and Mitchell, did a deal on the beach.