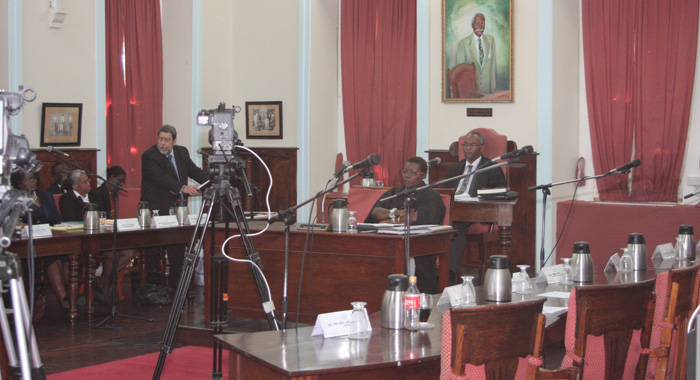 Members of Parliament who, without leave, do not attend meetings of the House of Assembly should have money deducted from their salary, Prime Minister Dr. Ralph Gonsalves says.

Gonsalves made the point in Parliament last week, when Opposition lawmakers were absent but did not inform the Speaker of the reasons for their absence.

“We should pass a law in this country that when you stay away from the House, we deduct your salary if you don’t have cause and if you don’t get permission of the Speaker. Because everybody else has to work and they get pay,” said Gonsalves, who is also Minister of Finance.

He said that while Parliament is not the only place where MPs do work, “a central part of being elected … is to come to Parliament to represent the people.”

“Mr. Speaker, you do not stay away from the House for which you have been elected, and if at all you find it necessary or desirable to stay away, it has to be for some cause other than located in partisan politics,” Gonsalves said.

“The House of Assembly, Mr. Speaker, has a provision for the Leader of the Opposition of EC$92,029 for the year. That’s his salary. He has an entertainment allowance of EC$8,460 a year. We provide additionally for the office of the Opposition Leader annually EC$153,000 so he could be supported to come to the Parliament.

“Now what is this? Is [it] a mockery? Eh? This thing irritates me, you know. But it irritates me not for any partisan political reason. It irritates me as a citizen of this country, as somebody who holds dear the question of representative government, that you ask people for your vote,

“… the beautiful thing about our system is that every singe person over the age of 18 is counted with a vote. But when you come here and walk out for no reason, or worse you turn up and give no reason, and you compound it with bad manners, not to inform the speaker, why should people pay any attention to vote for you the next time?

“… They have broken faith and their trust with the people who elected them,” Gonsalves said.

Opposition legislators walked out of Parliament on June 6.

The walk out came after the House Speaker, Hendricks Alexander, refused to ask Government senator, Julian Francis, to withdraw a statement which Opposition lawmaker, Daniel Cummings, said misrepresented what he had said earlier.

Francis had said that Cummings had said the previous day that construction of the international airport at Argyle should be put on pause.

Cummings, however, objected, saying that he had said sale of crown lands to help finance the project should be put on pause.

But the Speaker said he saw nothing to rule on.

After the walkout, Francis said:

“And I will concede on the matter that he said a pause. He didn’t refer to the pause on the entire airport …, but he said pause and ask them permission to sell the land.”