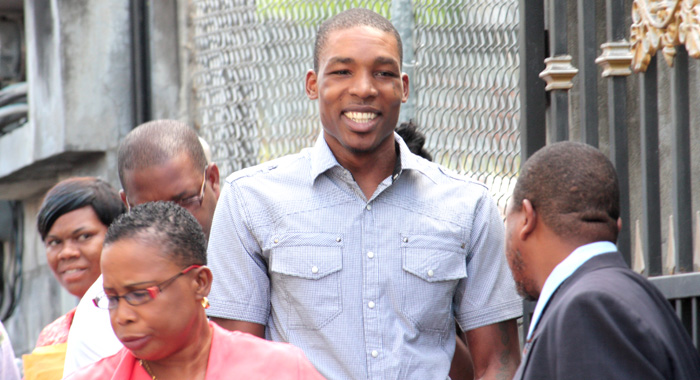 Police have charged with murder the man they returned to this country from Grenada on Saturday.

Colin “Cocoa Browne” David, 33, of Rose Hall, appeared in court on Monday, where the charges were read to him.

He is the second person charged with the May 5 murder of Devon Jahjust Steele, who was gunned down in Rose Place, Kingstown.

Jomorni Tash, 21, of Rockies, was earlier this month charged with Steele’s murder and remanded in custody.

Both men are scheduled to reappear in court on October 21 for a preliminary inquiry.

Meanwhile, Israel Bruce, David’s lawyer, told I-Witness News on Monday that contrary to reports, his client has not been questioned in relation to the June 13 robbery of EC$100,000 (EC$1=US$0.37) from a postal worker and the shooting of a police officer who went to help her.

Well-placed sources have told I-Witness News that the arrest of David could help to crack the robbery case.

The Coast Guard on Saturday returned David to this country from Grenada.

He became the second suspect to arrive in this country from that neighbouring nation in less than a week.

Last week Monday, Dwaine Sandy, who police had earlier said was wanted in connection with the June 13 robbery, arrived in this country, along with his lawyer, Grant Connell, on a flight from Grenada.

Police kept Sandy in custody for 48 hours on two separate occasions last week but released him each time without bringing any charges against him.

2 replies on “Man returned from Grenada charged with murder”