PM says allow police to probe robbery; no to meeting with Dwaine Sandy 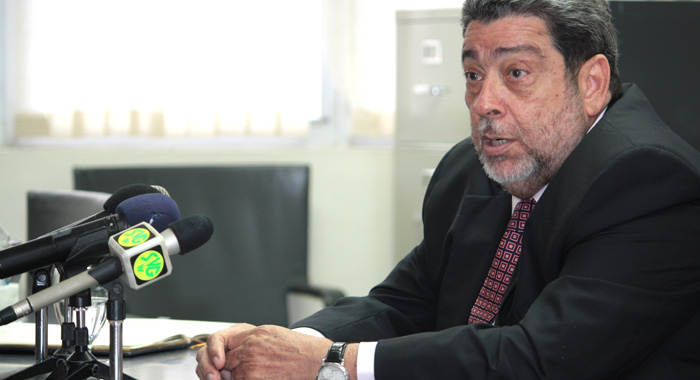 Prime Minister Dr. Ralph Gonsalves has responded to citizens’ criticisms of how police handled the arrest of Dwaine Sandy in connection with the robbery in Kingstown this month.

He has also said he would not meet with the former national footballer in relation to his arrest in connection to the June 13 crime.

Sandy told I-Witness News on Saturday that he would like a meeting with Gonsalves about the development.

Sandy was arrested twice, kept for 48 hours each time and released without charge in connection with the robbery of EC$100,000 (EC$1=US$0.37) from a postal worker and the shooting of a policeman who went to help her.

Sandy has maintained that he was in Grenada when the crime was committed and that he is innocent.

Some citizens, including Sandy’s lawyer, Grant Connell, have expressed concern about the police having deemed Sandy “wanted” and saying he should be considered “armed and dangerous” but did not charge him with any offence when he turned himself in.

Some have said that the action of the police placed Sandy’s life at risk.

But Gonsalves, who is Minister of National Security, told a press conference on Monday that there are many things about which citizens can criticise the police.

He, however, said that citizens are often acting based on partial information.

“With great respect, on what basis can citizens — any citizen — criticise the police in picking up releasing, picking up someone? Does that citizen know what the police know?” Gonsalves said.

He further said that he does not comment on on-going police investigations.

“The police are professionals,” he said, adding that it is not his business to know the detailed ins and outs of any particular criminal investigation.

Gonsalves referred to the story in which Sandy said he would like to meet with him.

“I have absolutely nothing to talk to anybody about any police investigation that is going on. I can’t interfere with that, however much I like to speak to all my citizens about all their problems. But there are certain things I just have to say no, please, don’t involve me in that. I have no role in that,” Gonsalves said.

“So, persons frequently make assumptions about things — which assumptions may or may not be correct. And my experience has always been let the professionals get on with their job, we may at the end of the day criticise or commend them, as the case may be…”

Gonsalves referred to the Boston Marathon bombing in the United States in April, when Bostonians complained after police cordoned off an area for an extended period of time while they investigated.

“It turned out that the police had access to information which the persons who were making the commentaries didn’t have access to,” Gonsalves said.

“[It] doesn’t mean that is the case in every situation that the police do not from time to time make errors in their investigation. But I think it is premature to jump on them and be criticising. I think we should give it a chance and see how it plays out,” Gonsalves said.

5 replies on “PM says allow police to probe robbery; no to meeting with Dwaine Sandy”