PM questions adequacy of security when postal worker was robbed 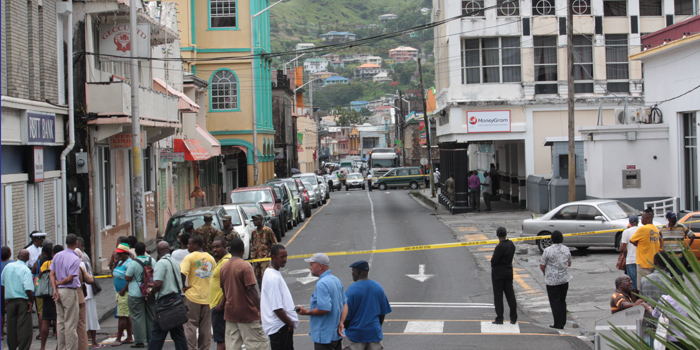 Prime Minister Dr. Ralph Gonsalves has questions of his own about the level of security when a Postal Corporation employee was robbed of EC$100,000 (EC$1=US$0.37) on June 13.

The female employee was relieved of the cash and a police officer who went to help her shot three times in Kingstown.

“The question which I need answer to has nothing to do with the police. However near the place is, was the Post Office moving $100,000 with a sufficiency of security? That, to me, is a question I would ask, because, on the face of it, I don’t think one employee of the Post Office and one officer are enough to move $100,000,” Gonsalves told a press conference on Monday.

Gonsalves, who is also Minister of Finance and National Security, questioned whether a business owner would transport such large sums of money in such a manner.

“… if [you] have a business place and they notice that you are doing fairly well, and you [are] banking money particular hours or going there to collect money to come, I know you, or any sensible person going have adequate security in moving from point A to point B, because it is a regular traffic and their must be some heightened security sensitivities,” Gonsalves said.

“Now, it may well be that the security was adequate for the purpose, but that’s a question I would ask to get the answer. And when I get the answer, I would be able to say to myself, as a reasonable human being, whether it was a sufficiency of security in all the circumstances. Different story. Questions like that I would ask,” Gonsalves said.

He was responding to a question about citizens’ discomfort with the police having said Dwaine Sandy was wanted in connection with the crime, deemed him “armed and dangerous” but did not charge him after he turned himself in.

“Something that may raise in you a question about whether they have it all together, is a different thing, and putting you in a state of discomfort,” the prime Minister said.