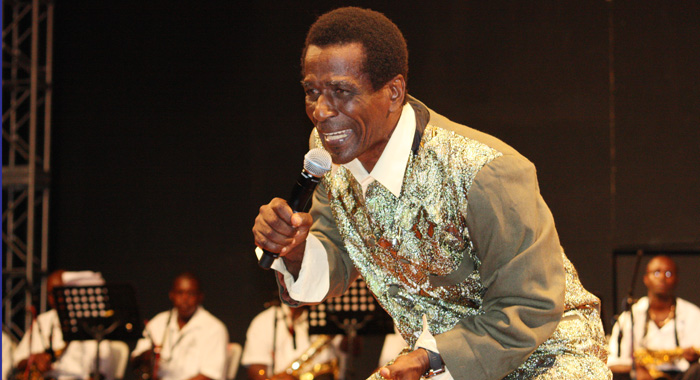 Robert Patches Knights, public relations officer of the Calypsonians Association, is photographed her in 2010, when he last competed. He says enough is not being done for calypso locally. (IWN file photo)

Calypsonian Association spokesman, Robert “Patches” Knights, says more needs to be done for the art form and has accused Carnival planners of putting calypso on the back burner.

Knight, who says he has not sung calypso since 2010 in protest against the Carnival Development Corporation (CDC), says the CDC should quit.

“They have lost their way, they have run out of ideas,” he said of the CDC, headed by chairman Dennis Ambrose and Chief Executive Officer, Ashford Wood.

Knights told I-Witness News last week Tuesday, ahead of the Calypso Semi-Finals on Friday, that things would only improve when the current CDC goes.

“This CDC has been in office now for over 12 years. And this CDC is the one responsible for all this negativity,” Knights said.

“If they are not removed, nothing new is going to happen. Look at what they had to do with the ragga soca and soca monarch,” he said of the merger of the two shows.

“The reason for that is that the ragga is not generating any money. So when you talk about wastage, they are trying to force a show that ain’t making no money,” Knights said.

Among Knights’ various concerns about the operation of the CDC was its subtraction of the appearance fee from the prize monies of the top performers in the calypso finals.

“I personally find that to be robbery; because, if you pay me to appear on a show and I appear, because I win a prize, you are going to penalise me for winning a prize by taking away the money you pay me to appear? That’s a crucial problem,” Knights said.

He also objects to the preliminary judging in the calypso competition being held at Victoria Park, which, he observed, is the “big yard”.

“You have to work to get in the park,” he said, adding that the former Cinerama complex could be used for tent shows.

Knights said bards are finding it difficult to pay for the arrangement and recording of their songs but cannot find sponsorship because businesses contribute directly to the CDC.

He further said that semi-finalists are no longer interviewed on radio and that certain songs do not get much airplay because of their themes.

“So all these are problems that we see confronting the art form. … Calypsonians are suffering tremendously because of the prejudice in this country based on the kind of song you sing and how people view you … politically,” he said.

Knights told I-Witness News that he has approached the CDC three times with a view to taking tent shows to schools, as had been done in the past, but has not received any support.

He further said that there was a history of having calypsonians who did not reach the semis perform at Mardi Gras but that also has been discontinued.

He further accused tent leaders of telling their members not to sing political commentaries with a view to increasing their chances at the crown.

“The evidence is that several persons discussed that, people from within the tent,” he said when probed, but declined to identify the bards, adding that he is not sure if they are prepared to go on record.

He said that of the 22 songs chosen for the calypso semis only one had a strident political message, I-Madd’s “Jumbie Squeezing We”.

“And personally, the majority of us who know the tradition of calypso expect him not to go much further. So I am saying that we seriously believe that there is a plan afoot to, more or less, keep calypso on the back burner,” Knights said.

He further told I-Witness News that while the onus is on the Calypsonians Association to recommend judges, the CDC “will still impose on us who they want to judge.

“This has been happening for years. There are a lot of people who are judging who are not qualified. They don’t understand music, they never write a song, they never write a poem, they are not musically inclined but some of them are on the judges panel.”

Knights, however, declined to name the persons he described, saying, “I won’t pin point people.”

Asked what are the characteristics of a good judge, Knights said: “A good judge is somebody who has some experience in actual composition of songs, … and a person who has a musical understanding and bottom line, an honest and decent person.”

Knights further accused the CDC of having an agenda.

“The agenda is to see if they can make everything jump up and wave,” he said.

But asked if it is not a case of the CDC implementing cuts to try to balance its budget, Knights said:

“I wouldn’t buy that because the CDC at this point have a whole bunch of, I don’t want to say wastage.”

Knights is also an activist of the opposition New Democratic Party. Asked if his criticism of the CDC are not a reflection of his politics, he said:

“I point out that they blocking you from going to the schools where you use to go [to perform], the monies they take back when you place. … Carnival development — that is what I am dealing with. Since you have that D for ‘development’, any aspect of development should be welcomed.”