Designer drugs on the rise, demand for traditional drugs levels off 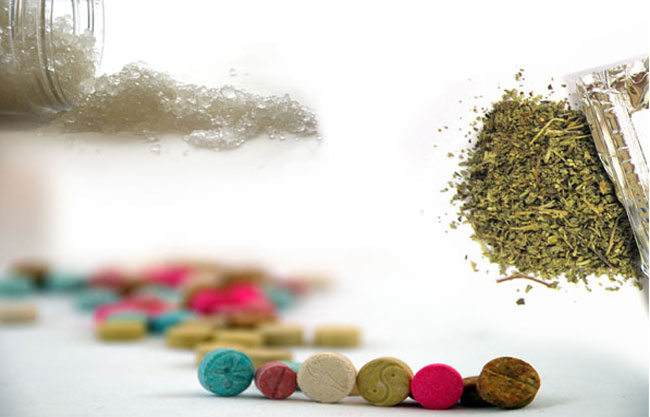 The use of traditional drugs is largely stable, but demand is soaring for untested concoctions of psychoactive substances that threaten to be more dangerous.

The head of the United Nations drug and crime agency made the observation on Wednesday, International Day against Drug Abuse and Illicit Trafficking.

The popularity of traditional drugs, such as cannabis — still the most widely used illicit substance — heroin and cocaine seems to be declining in some parts of the world, while the abuse of prescription drugs and new psychoactive substances (NPS) is on the rise, according to the 2013 World Drug Report launched Wednesday in Vienna, Austria.

Sold openly, including online, NPS are marketed as “legal highs” with nicknames such as “spice”, “plant food”, “bath salts” and “meow meow”, a type of mephedrone with effects similar to the effects of cocaine, amphetamines and ecstasy.

“There is an alarming new drug problem,” U.N. Office on Drugs and Crime (UNODC) Executive Director Yury Fedotov said, using the occasion of the International Day against Drug Abuse to launch the report at a special high-level event of the Commission on Narcotic Drugs (CND), the central UN policymaking body dealing with drug-related matters.

The drugs are called “designer” because they are based on existing illegal recreation drugs with chemical structures that are modified to varying degrees to evade the drug laws. The mixtures of NPS can easily cross from “safe” to toxic, resulting in “delirium and violent behaviour”.

The number of NPS reported by Member States to UNODC rose from 166 at the end of 2009 to 251 by mid-2012, an increase of more than 50 per cent, according to the U.N. agency. It now exceeds the total number of the 234 substances under international control.

“Given the almost infinite scope to alter the chemical structure of NPS, new formulations are outpacing efforts to impose international control,” Fedotov said.

In response to the proliferation of NPS, UNODC has launched an early warning system which the U.N. said will allow the global community to monitor their emergence and take appropriate actions.

UNODC is also supporting its “Make health your ‘new high’ in life, not drugs,” awareness campaign to inform the public, particularly young people, about the harmful effects of NPS.

“The campaign aims to mobilize support and inspire young people to act against drug abuse,” Fedotov said in his message for the Day.

While NPS is on the rise, the use of traditional drugs appears largely stable, according to the UNODC report.

The use of amphetamine-type stimulants (ATS), excluding ecstasy whose popularity dipped, appears on the rise worldwide. In 2011, an estimated 0.7 per cent of the global population aged 15-64, or 33.8 million people, had used ATS in the preceding year.

Methamphetamine continues to dominate the ATS business, accounting for 71 per cent of the global ATS seizures in 2011. Seizures of crystal methamphetamine increased 8.8 tonnes, the highest level during the past five years, indicating the substance is “an imminent threat,” the UN agency reported.

In Europe, heroin use seems to be declining, according to UNODC’s report. The use of opiates – heroin and opium – remains unchanged, but there are instances of higher opiate use in South-West and Central Asia, Eastern and South-Eastern Europe and North America.

In terms of production, Afghanistan retained its infamous title of lead producer and cultivator of opium, accounting for 75 per cent of global opium production in 2012 of 236,320 hectares.

Meanwhile, cocaine, on the decline in the United States — the world’s largest market — seems to be expanding in South America and the emerging economies in Asia.

Estimates of the amounts of cocaine manufactured ranged from 776 to 1,051 tonnes in 2011, largely unchanged from a year earlier. The world’s largest cocaine seizures — unadjusted for purity — continue to be reported from Colombia and the US at 200 and 94 tonnes, respectively.

“We have agreed on a path for our ongoing discussion,” Fedotov told the CND meeting.

He added that he hoped the discussions would lead to an affirmation of the importance of the international drug control conventions, as well as an acknowledgement that the conventions are humane, human-rights centred and flexible.

The head of the U.N. agency stressed that there must also be a firm emphasis on health and support for alternative sustainable livelihoods.

“It is also essential that we recognize the important role played by criminal justice systems in countering the world drug problem and the need for enhanced work against precursor chemicals,” he told the participants.

In his message on the International Day, U.N. Secretary-General Ban Ki-moon called for a comprehensive response to the world drug problem, one that included legal action and robust law enforcement, as well as prevention and treatment approaches “rooted in science, public health and human rights.”

“The goal of our work must be to reduce the number of people in prison, decrease the physical and mental health burden of drugs, and prevent HIV transmission,” he declared, adding: “Let us work together to help millions of people around the world escape the destructive impact of illicit drugs.”

The U.N. chief called on governments, the media and civil society to do everything possible to raise awareness of the harm caused by illicit drugs.

2 replies on “Designer drugs on the rise, demand for traditional drugs levels off”