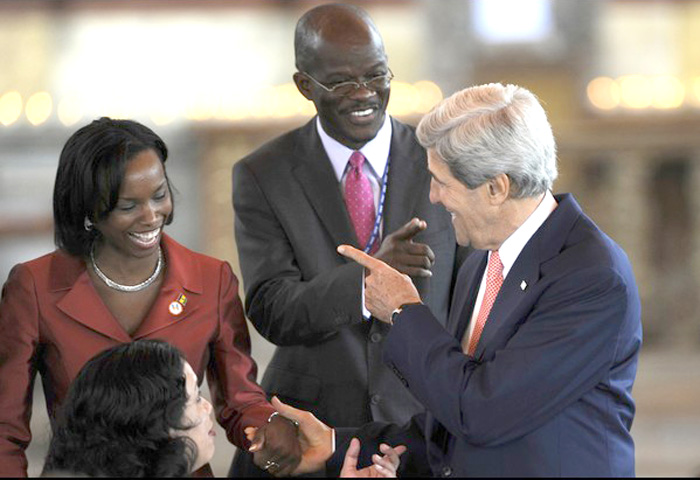 Elements of the U.S. State Department’s 2013 Trafficking In Persons (TIP) report is “prescribing solutions for problems that do not exist” in St. Vincent and the Grenadines (SVG), the Vincentian embassy in Washington says.

The report classifies SVG as Tier 2 — a nation which do not fully comply with the minimum standards prescribed by the U.S.’ Trafficking Victims Protection Act (TVPA), but is making significant efforts into bringing themselves into compliance.

The report reflects the significant strides made by the government of SVG in the fight against Trafficking In Persons over the years, the embassy said.

“Indeed, the government regards the report as a more accurate reflection of the situation in St. Vincent and the Grenadines, compared to reports of the past which unjustifiably classified the country as Tier 2 Watch List,” it further said in a release earlier this week.

But the Vincentian embassy said that in spite of the overall favourable report, government officials are concerned that some elements of the report are “inaccurate or unfounded”.

The release said that while the report recognizes the commendable progress made by the Vincentian government, the report also asserts that SVG is a source, transit and destination country for trafficking victims.

The report further lauds SVG for investigating potential trafficking cases, but laments the absence of prosecutions.

This is one aspect of the report which has gotten the attention of SVG’s ambassador in Washington, La Celia Prince, who criticizes the report as “prescribing solutions for problems that do not exist,” the release said.

Prince said that in previous meetings with the State Department’s Trafficking Unit, she made it clear that the government of SVG has confidence in the legal process so that if an investigation is conducted which concludes that elements of trafficking are not substantiated in the case, then there can be no prosecution.

“In my view, the report practically begs the trumping up of charges,” Prince said in the press release.

“It notes that there were no reports of public officials complicit in human trafficking offenses, as though this were an expected outcome of the investigations.

“This is one of the things that the United States looks for when writing their reports and we have registered our alarm to the Department of State that their reports are predicated on the assumption that trafficking takes place in all countries and that there are always high-level officials involved. That is quite simply not the case,” Prince further stated.

The release noted that in the 2013 report, only 30 countries — mainly western nations — were designated as Tier 1 countries — the most favourable ranking.

In releasing the 2013 report, U.S. Secretary of State, John Kerry, reaffirmed that the United States will continue its leadership in fighting Trafficking In Persons.

But the Vincentian embassy said that the references to “modern day slavery” when speaking of the growing crime of trafficking in persons is something which has long caught the attention of Caribbean diplomats in Washington.

The release said that Prince acknowledges that while human trafficking is a terrible crime, the use of the word “slavery” can have the effect of obscuring the extent of the egregiously wrong practice of slavery of Africans.

“I dare not refer to human trafficking as slavery,” Prince said.

“Human trafficking is a terrible thing. But it is a crime that corrals global support in fighting against it. This in no way compares to the enslavement of millions of people through the regime of slavery that was institutionalized and protected by the law for four centuries,” the Vincentian envoy further stated.

The release further said that Prime Minister of SVG, Dr. Ralph Gonsalves, has been playing a tremendous leadership role within the Caribbean Community, for a campaign calling on western countries that built their nations on slavery and the slave trade, to issue reparations as a means of redress and atonement for this unspeakable crime.

Gonsalves told reporters in Kingstown this week that the TIP report does not take cultural values into consideration.

He said that while families consider having their children assist in their businesses, as a vital part of their education, the report regards it as child labour