Gonsalves lauded for faith in LIAT 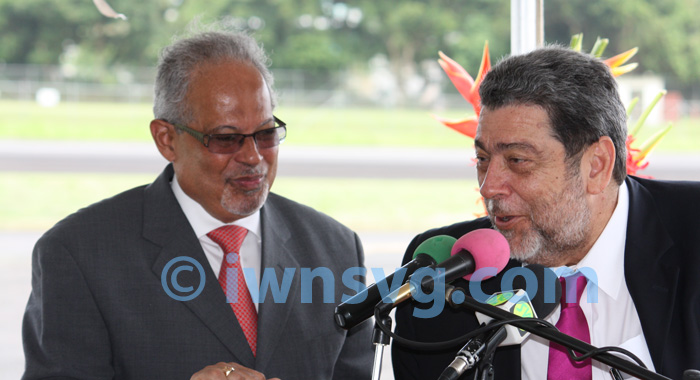 Chair of LIAT’s board of directors, Dr. Jean Holder, and the airline’s chief executive, Ian Brunton, have lauded the contribution of Prime Minister Dr. Ralph Gonsalves to the airlines re-fleeting exercise.

Holder said on Wednesday at a ceremony to welcome LIAT’s first ATR 72-600 to St. Vincent that he regards Gonsalves as a champion of good politics.

“I don’t know how kind history will be to him but I think they will remember that he championed the cause of regional air transportation, which I want to remind people is probably … the most important socio-economic aspect of our lives in the Caribbean,” Holder said.

Meanwhile, Brunton, speaking at the same ceremony, said the Caribbean is better off because of Gonsalves’ leadership.

“This entire region is better for him, because of his leadership and what he has done to make this happen. That plane standing behind us would not be there today without the courage and faith and belief in LIAT and the belief in the region and the belief in aviation in this region of Dr. Gonsalves. So, I have to thank him publicly for this,” Brunton said.

Gonsalves told the ceremony that when his government decided in 2001 to invest in LIAT, he knew they were investing in an insolvent airline.

But he further said that LIAT has survived notwithstanding “the vicissitudes of life, … the changing fortunes of the aircraft industry, … international crises and regional meltdowns in the financial and insurance sector, … and against the view of a large number of Thomases who always wanted to see the wound in which to put their hand”.

LIAT is slated to acquire 12 new aircraft by the end of next year.