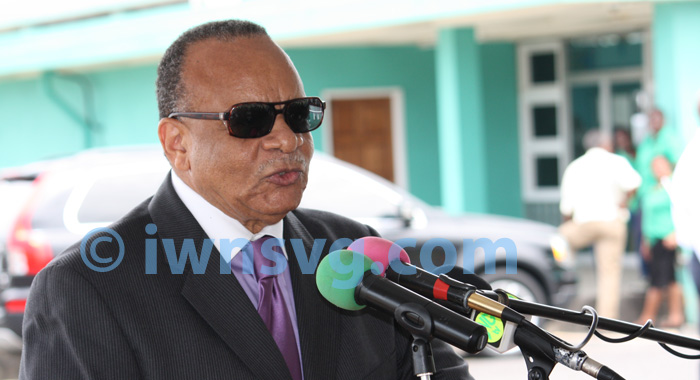 Chairman of LIAT’s board of director, Dr. Eric Holder.

Chairman of LIAT’s board of director, Dr. Jean Holder, says he is pleased to be associated with the “irresponsible act” of investing US$100 million in the “cash-strapped” regional airline.

Holder, speaking at a ceremony to welcome LIAT’s ATR 72-600 to St. Vincent on Wednesday, said that regardless of what LIAT does, the press invariably uses the adjective “cash-strapped” before the airline’s name.

“And there is nothing truer. LIAT is cash-strapped,” he said, adding that it is a risk to invest US$100 million in the airline, but a risk with which he wants to be associated.

“If this is an irresponsible act, put me at the head of the list,” Holder said at E.T. Joshua Airport.

“This act is as irresponsible as the idea that you can build the Panama Canal and stop people from having to travel around the horn of South America — very irresponsible,” Holder said.

“This is the kind of irresponsibility that I am hoping when I leave this planet people will associate me with,” he further stated.

But Holder said he prefers to see the investment “as an act of faith.

He said that Tuesday morning LIAT had not yet received permission to fly the aircraft to St. Vincent but Chief Executive Officer Ian Brunton believed that permission would have been granted in time.

“This is an airline where there is a lot of can’t do. I can’t do this; I can’t do that. But these people here, these are the can do people,” he said, adding that he hoped that after his death, the 57-year-old airline would still be expanding.

“I see the light at the end of the tunnel and it is burning brighter every day,” Holder said.

He further stated that he believes LIAT has been given a special responsibility to unite the Caribbean, which spreads over one million square miles.

“I always say the Caribbean is a place which both God and man fragmented and LIAT has been given the responsibility for building this bridge over this region,” Holder said.

He said that LIAT is so important that if it stops flying tomorrow, “this region will come to a grinding halt.

“There will be more paralysis here than any doctor has ever seen,” Holder said.