Two artistes have double chances at winning a car this weekend 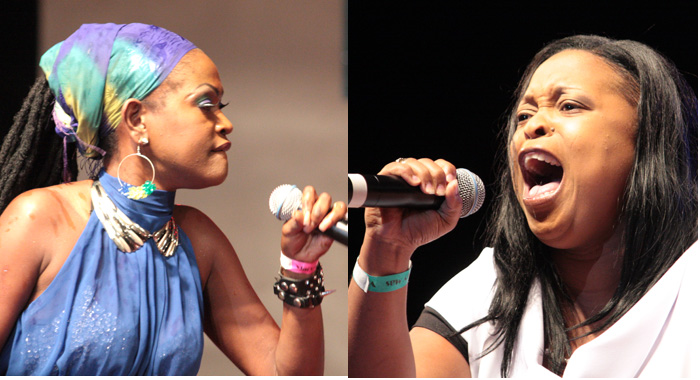 Lornette Fya Empress Nedd-Reid and Shaunelle McKenzie are the only two artistes who have a chance to win both the Soca and the National Calypso Monarch titles. (IWN montage)

Two female artistes can each take home two cars this weekend as Vincy Mas 2013 revs up ahead of a climax on Tuesday.

Lornette “Fya Empress” Nedd-Reid and Shaunelle McKenzie are the only two artistes who have a chance to win both the Soca and the National Calypso Monarch titles on Saturday and Sunday, respectively, for which cars are the top prizes.

Coreas Hazells Inc. has donated two Nissan Skylines, each valued EC$40,000, as the top prize for each of the competitions.

But while the two females are the only two bards who have a chance at both cars, they will have to fight off tough competition from other contenders.

Fya Empress will undoubtedly be in the spotlight at Saturday’s show as she defends her ragga soca domain even as she tries to unseat Soca Monarch Gamal “Skinny Fabulous” Doyle in its sister kingdom, power soca, all in one night.

The artiste seems up to the challenge as she said earlier in the Carnival season — when organisers announced that the Ragga and Power Soca competitions will be merged — that artistes who complained about singing two songs in one night should consider opting out.

But Saturday’s show will also see the return of Delroy “Fireman” Hooper, who has won the power soca crown more times than any other artistes here.

Fans will know if the unexplained break that Fireman took last year rejuvenated his career or if they are in fact witnessing the beginning of a new phase of the art form, with Fireman as a footnote as the rivalry for dominance switches to Skinny and the Empress.

Meanwhile, Sunday night Fya Empress will have to defend her calypso crown against 10 contenders, including former monarch Grantley “Ipa” Constance.

The line up also includes Shernelle “Skarpyon” Williams, who placed second in 2011.

But Fya Empress, who also has the benefit of experience in the art form in Trinidad, told I-Witness News last year that she will be better this year.

“We know what we are working with here now. I have been here since 2007 back and forth so I know, I am gradually learning what their standard of calypso would be, how they would like it to portray on stage and I am sure that next year it will be better,” she told I-Witness News in 2012 after being crowned calypso monarch.

Correction: Shernelle “Skarpyon” Williams placed second in 2011 and not last year as we stated earlier.