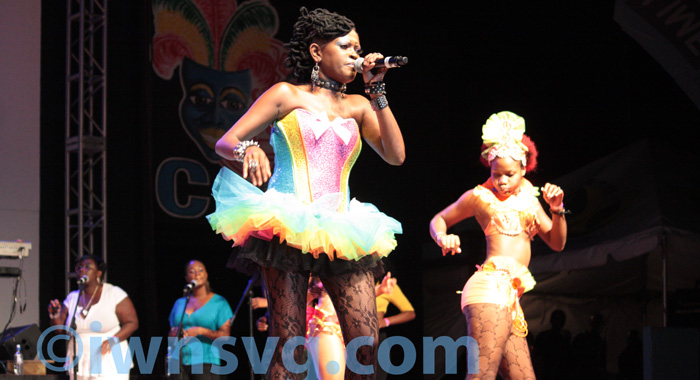 Fya Empress has retained the Ragga Soca Monarch crown for another year.

Shernelle “Skarpyon” Williams must have realised that his “nine-inch hammer” is also just not heavy enough to “break” Lornette “Fya Empress” Nedd-Reid’s “conch”.

The Empress outdid “De Stingerman” and eight other contenders to retain her crown during the Ragga Soca Monarch show at Victoria Park on Saturday.

Skarpyon pelted his hammer but Fya Empress “Ketch It” even as her performance showed Shanelle Mc Kenzie that she wouldhave to try harder to get “Up in dat” and will settle into third place this time around.

The Empress performed the hit number — “Ketch It” — that has captivated soca lovers since it was released earlier in the Carnival season.

But although she was a favourite to win the show, Empress told I-Witness News after her crowning that an artiste must never think that victory is a foregone conclusion.

“We must never look at it like that. As an entertainer and as an artiste, I was taught not to ever think that everything comes on a platter. Competition means you come here to compete [and not to] come here and because you have seven crown [to think] you’re gonna win again,” she said.

“I came with an open mind, I love all my artistes, they did a great job, but at the end of the day the judges decision is final,” Fya Empress said in the interview Sunday morning, just over 12 hours before she was scheduled to defend her Calypso Monarch crown.

Fya Empress, who is based in Trinidad and Tobago spoke highly of Vincentian artistes’ soca offerings this year.

“We had the best music this year out of ragga and soca. I enjoyed that. I mean all of the songs were great; very, very good. I enjoy “Conchs”, I love Shaunelle, every one of them,” she said.

Fya Empress said that her decision to sing “Ketch It” in the competition was “because it is the people’s choice and we always believe in the people. They come first,” she said, adding that she also love “Laloo”, another of her ragga soca songs this year.

She continually spoke in the plural and explained that “we” includes her husband, David “Mr. Fugitive” Reid, and “the whole Fya Empress team.

She said the concept for “Ketch it” came keep during a post-show review in Tobago, where she has worked in the hotel industry for the past 15 years.

“… we were having a drink, me and my husband, and he said, ‘Oh gosh, Empress. Me ketch it. Time for me go sleep.’ And I said, ‘Wah? Ah ketch it! Carnival song then, because that could be a hook line — ah ketch it’,” she recounted.

“If you hear that line, I’ve heard it before in St. Vincent, when they say ‘Ah ketch it’, that is because yo’ had one too much. But I saw ways of opening that song in a different perspective where we did not have to use much of alcohol, because you can catch positiveness, you can catch all sorts of things — a carnival vibe, a Vincy vibe — and that’s what we worked with this year.”

Empress was third in the Soca Monarch competition, which was also held Saturday night.

She was one place lower in the ranking than last year, when Delroy “Fireman” Hooper opted out.

And Empress said that while she did not see Fireman’s performance, she always respects the two male artistes, who have dominated the soca art form here for the past several years.

“They have their part in Carnival, they have played a very big role and I respect them and to come third behind them is a blessing still. Just note, next year is there again and Fya Empress will be back,” she said.