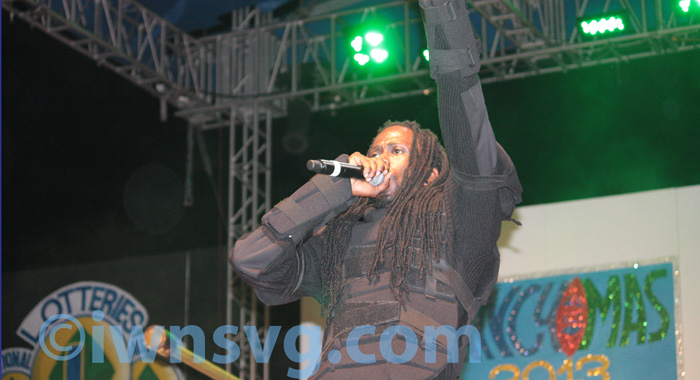 Gamal “Skinny Fabulous” Doyle upped the theatrics at Soca Monarch a few notches in a performance Saturday night that won him another Soca Monarch title.

The artiste succeeded in doing what not even election violence in 2010 could achieve: getting Leader of the Opposition, Arnhim Eustace, and Prime Minister Dr. Ralph Gonsalves, appearing on the same “platform” in unreserved support for one goal.

But Skinny’s win might be telling of his own skills as a performer or those of his closest rival, Delroy “Fireman” Hooper, who returned after a one-year hiatus and placed second.

Skinny’s performance began with a video of a “newscast” about a “terror attack” in Kingstown. Eustace, then Gonsalves, appeared in the recording expressing confidence in Skinny to quell the situation.

Then, the artiste, who had previously flown into “Carnival City”, Victoria Park, with a jetpack, entered after a helicopter appeared overhead on Saturday, at the beginning of a performance that will undoubtedly leave his production team thinking even further outside of the box for future acts.

Skinny’s rendition of “General” was further complemented by the convincing military costumes that his supporting acts wore, and a “tank” that formed part of the props.

“It’s a good vibe. It’s hard work,” Skinny told I-Witness News of his win, as he thanked Alex Barnwell and the rest of his crew.

“It is just a teamwork thing,” he said in he post-show interview.

The “key” to winning, he said, “is good people around you to bounce good ideas from and concentrate on your song.

Skinny, who has appeared on political platforms on behalf of the ruling Unity Labour Party government, said it was not difficult to get the leader of the two main political parties here to agree to be part of his act.

“You have to go with a rationale and make sure that everybody is comfortable with the content and the approach that you are going to project on stage. And once you can answer all the questions that you know you are going to be faced with, it’s easy to get it done,” the artiste said.

Skinny further told I-Witness News that he is not a polarising artiste.

“I am for the unification of St. Vincent. I will never go to the Prime Minister and not go to Arnhim. … In fact, I approached Mr. Eustace first because if I wasn’t able to get Mr. Eustace, I was not going to do it,” he said, adding, “Sometimes, it just helps to say please.”

But he later said, “It came from the Caribbean.”

And it took “proper and extensive research” to get a helicopter to be a part of his act.

But Skinny and his team, for their ability to sway politicians and to get helicopters to fly, might not be as good at keeping their acts secret.

Skinny, during his performance at number 12, two acts before Fireman, the last performer, spoke about artistes who would come on stage and talk about him rather than their song.

It seems that Skinny might have realised that Fireman had gotten wind of his performance and had prepared an appropriate preemptive response.

And, as Fireman’s performance began, it was immediately clear that the “General’s” bombshell was not going to be allowed to ravage Fireman’s domain.

Fireman’s performance began with a video of Green Party leader Ivan O’Neil, a real veteran who served in the British Army, dressed in war medals.

O’Neal said the Opposition Leader and the Prime Minister had conspired with Skinny but that he (O’Neil) will send the undertaker –a reference to Fireman’s song, “Undertaker 21-0” — to take care of the “fake general”, which sent the crowd into further euphoria.

Fireman’s performance did not have much in the way of theatrics with only a few actors dancing and a man, depicting a gunshot victim, standing in a coffin.

But the crowd’s response did prove that Fireman is still well-loved in the soca art form, as chants of “Fire! Fire!” — the artiste’s name, and ‘We just can’t change!” a hook line from Fireman’s song, erupted long before the artiste was announced or appeared on stage.

The artiste used his performance to pay tribute to community activist, Stuart “Rudy” Louie, one of his relatives and a former Roses Crew member, who was shot and killed in Gibson Corner last year.

And, Skinny told I-Witness News, he was happy that Fireman had returned to the competition.

“I will tell you a secret. For a lot of people this was a walk in the park. They said, ‘Ah, you have it, you have it.’ I respect all competition and all artistes in the competition but Delroy Hooper, I will always consider him the most formidable competition out there,” Skinny said.

But when asked what things, Skinny responded: “ Well, I am learning too. So, maybe the things he can do I am now beginning to do them too. But I would never try to downplay his significance back then and the significance he still has right now.”

Asked about the fact that Fireman, with his limited theatrics, placed second, Skinny said, “When we do something, we do it properly. If I am looking for an impact, might as well achieve the impact I want. Not just what I see on a movie and film it over and wish I could do it.

“I spend months researching how to get it done. So, I am not going to come up here with a cardboard tank,” he said.

Ask how much such a performance cost, Skinny said he could not give a figure.

But the artiste’s elaborate performance has won him a new Nissan Skyline compliments Coreas Hazells Inc. and EC$25,000 in cash from the Carnival Development Corporation.

Lornette “Fya Empress” Nedd-Reid’s “Earthquake” was not enough to shakedown Skinny and Fireman as they continue their rivalry for dominance of soca here.

Fya Empress, who was second last year, placed third this year, while Shertz “Problem Child” James was fourth with “Riot”.