CDC ‘pleased with the outcome overall’ of Vincy Mas 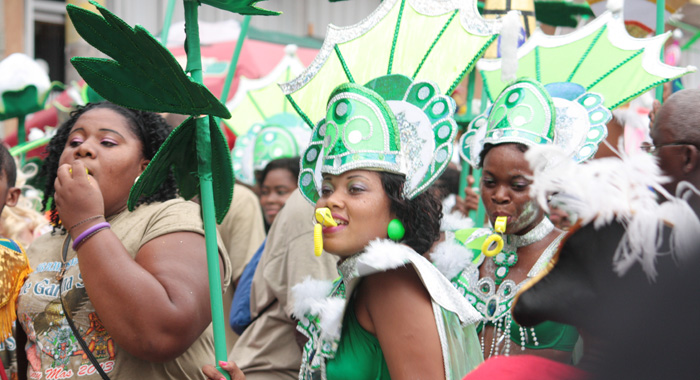 Masqueraders from Band of the Year 2013 winner, SVG Players International Mas Band, dance in Kingstown on Tuesday, July 10, 2013. Carnival planners say they are please with the outcome of the festival. (IWN photo)

The Carnival Development Corporation (CDC) says it is “pleased with the outcome overall” of Vincy Mas 2013.

“The production of our shows met the expectation of the patrons. They were well executed with good time management,” Dennis Ambrose, chair of the CDC said in his review of the festival.

“The attendance at most shows was fair, except for the day of Mardi Gras, when the weather kept most of the patrons at home in the earlier part of the day. Later on though, the streets were very crowded. That was understandable,” he said in the review circulated to the media on Wednesday.

He further said the weather affected Junior Carnival, which had to be postponed from Saturday, June 29, to Thursday, July 4, because of rain.

“… but this actually turned out to be better attended show than when the event is staged on the usual Saturday afternoon,” he said.

Ambrose further said that the attendance at Soca Monarch last Saturday was “overwhelming — each year surpassing the previous one”.

The CDC this year, for the first time, merged the Ragga and Power Soca Monarch shows into one event.

Ambrose said J’ouvert was “absolutely huge” and the Monday Afternoon Street Party was “out of this world — bigger than ever before.

“The success of Monday spoke volumes for the interest and enthusiasm of the events of Vincy Mas. It just couldn’t get hotter than that — especially under the circumstances,” he said.

He further said that the CDC is happy that it was able to reach so households by pay-per-view and Internet streaming.

He added that the CDC this year endorsed a number of private events, most of which seemed to have had pleasing outcomes.

“To the visitors who took the time to come to Vincy Mas and those who participated in the events, we hope you had a wonderful time. It seemed that way from our observation. We hope that you will share this experience with friends, relatives, and colleagues upon your return, and invite them to come back with you next year and in the future,” Ambrose said.

“To the Government, its agencies and the sponsors, the direct and indirect financial support that you provided to us, the Components and the festival overall is graciously welcomed, as you know we could not achieve it all this way, without you,” he further stated.

To the police, security services, the Sanitation Department and all other entities, including the street vendors and street bars who upheld up the ‘No Glass Bottle Policy’, the CDC thanks you all for this support and cooperation – in helping us to execute the hottest carnival in the Caribbean,” Ambrose said.