FAO to hire Vincentian to help improve cooperation with OECS 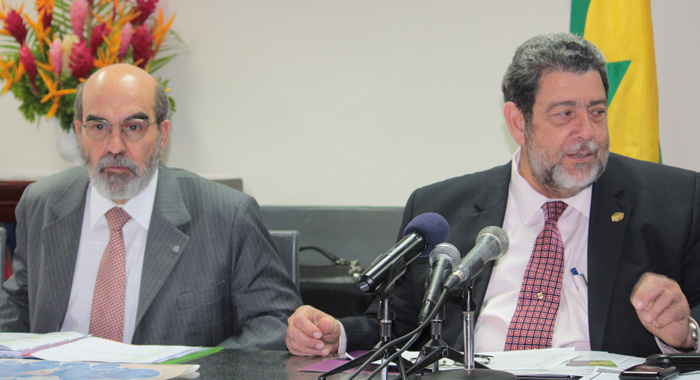 The Food and Agriculture Organisation (FAO) will hire a Vincentian to work with them to improve cooperation with the Organisation of Eastern Caribbean States (OECS).

FAO Director-General, José Graziano da Silva, made the announcement on Wednesday after a meeting with Prime Minister Dr. Ralph Gonsalves.

da Silva, who is on a two-day official visit to this country, told a joint press conference with Gonsalves that his organisation has agreed to have better coordination mechanisms with the OECS and will look for ways to have a common approach within the nine-member bloc.

He said the CVs of six Vincentians will be presented and one will be selected to work at the FA to help improve cooperation in the region.

Further, he said that in 2014, the International Year of Family Farming, the FAO will host an event in St. Vincent and the Grenadines to promote family farming, adding that the format of the event will be discussed later.

He said that several concrete issues were discussed and that he was slated to follow up on them in a meeting Minister of Agriculture, Saboto Caesar Wednesday afternoon.

“We want to increase the presence of FAO in the region, especially among the Eastern Caribbean States. We believe that this is a region that needs special attention due to the impact of natural disasters, especially in the past, and also because of the decrease of the banana production that has heavily impacted the economy of this region,” da Silva said.

He said the meeting discussed the diversification of the products that can be produced locally.

His visit came on the invitation of Gonsalves during a meeting in Rome last month, where SVG was among 38 countries the FAO recognised for halving malnutrition ahead of the 2015 target.

da Silva, however, said that within the countries that have achieved the goal, improved food production is not enough to target hunger.

“We need to provide better accessed to food,” he said, adding that among the issued that need to be addressed are improved production, social protection, and social networking.

He said programmes like school meals are very important to combat undernourishment among children and that the FAO is committed to work with SVG in that regard.

The FAO director also said that in combating the problem, there needs to be more infrastructure, like roads and storage capacity to reduce the chances of farmers losing their product because of lack of market access or proper storage.

The FAO delegation also comprised Carlos Alberto Den Hartog, special advisor in the office of the Director of the FAO and Dr J.R. Deep Ford, sub-regional co-ordinator of the FAO.