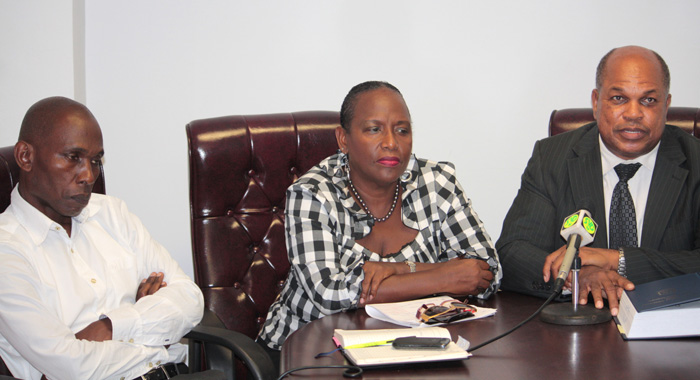 Three executive members of the Bar Association were split two-one on the implications of statements in a Court of Appeal judgement for the nine charges against opposition senator, Vynnette Frederick.

The differences of opinion emerged at a press conference Wednesday, where the association restated its view that the arrest of Frederick earlier this month was illegal.

The arrest and proffering of nine charges against Frederick on July 11 are the latest episode in a saga that began following the December 2010 general elections, when Frederick filed private criminal complaints against Prime Minister Dr. Ralph Gonsalves.

Director of Public Prosecutions (DPP), Colin Williams, took over and discontinued the cases and higher courts upheld his decision.

The London-based Privy Council is reviewing the Court of Appeal’s decision.

Six charges relating to perjury were later laid against Frederick.

The charges stemmed from the contents of affidavits she filed as part of the complaints against Gonsalves.

On July 11, a magistrate threw out the six charges, for lack of particulars.

The senator was re-arrested that same day and nine charges were laid against her.

But the Court of Appeal, in upholding the decision of the Chief Magistrate to deny judicial review of the DPP’s decision to discontinue the case, made comments that some have argued are detrimental to Frederick’s defence.

They have pointed to the statement in the judgement where the court said Frederick “made a material non-disclosure which was not an innocent one”.

Kay Bacchus-Browne, immediate past president of the association, told the press conference that the nine charges against the senator “are not going anywhere in the final analysis”, adding that the comments in the judgement were made by the way.

Bacchus-Browne was a lawyer for Frederick and is likely to be called as a witness in the case.

But Vice-President of the Bar Association, Jomo Thomas, speaking at the same press conference, said he had “a fundamental shade” with Bacchus-Browne, noting her comments that the case is going before the Privy Council.

“But as a student of the law, I know, and Miss Browne ought to know that the position of the Court of Appeal is the law until the higher court reviews it and comes to a conclusion one way or the other,” Thomas said.

Bacchus-Browne responded, saying the statement in the judgement is “just a comment”.

“Some persons may want to give a lot of credit to it but it is a comment. Judges can always comment based on what they thought that they knew was before them at the time,” she further said.

“We shouldn’t say that,” Thomas, however, responded. “The Court of Appeal had a clear opinion on the thing….

“I don’t agree with that presentation at all that the Court of Appeal was making a comment,” Thomas further said.

“Isn’t there a decision from the Court of Appeal on this thing? Because, if it’s not a decision, what are the lawyers appealing?” he further said.

“I was involved in the case and I am saying it was a comment on the case,” Bacchus-Browne responded.

President of the Bar Association, Dr. Linton Lewis, who, like Frederick, is also an opposition senator, commented saying, “What Miss Bacchus-Browne is saying is that this was obiter dictum, things said by the way.”

Thomas maintained his position and Bacchus-Browne suggested that he read the judgement.

Meanwhile, the DPP, speaking separately on Wednesday, told reporters that the Court of Appeal’s decision has implication for Frederick’s case.

He read from the judgement and said, “If something was not an innocent mistake, you can ask yourself if is wasn’t innocent what was it….

“So how that could be by the way?” he further said in response to Lewis and Bacchus-Browne’s position.

“That is their central reason. The central reason is that what she said was untrue. That is why they decided to set aside the decision, on her admission. So, it is not by the way that they say so,” the DPP said.