In Cuba, Gonsalves says ‘the empire’ has the world upside down 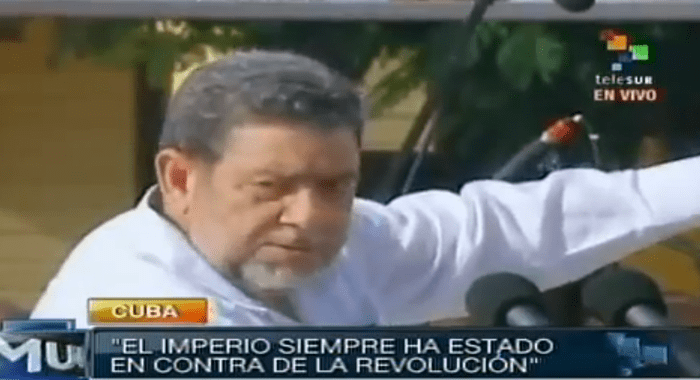 In this image, captured from a YouTube video, Prime Minister Dr. Ralph Gonsalves is seen as he spoke at celebrations in Cuba on Friday.

Prime Minister Dr. Ralph Gonsalves on Friday blasted “the hypocrisy of the empire” and told Cubans that history had absolved Fidel Castro and the other instigators of the Cuban Revolution.

Gonsalves was speaking in Santiago de Cuba, the second largest city in that Spanish-speaking Caribbean nation, during celebrations to mark the 60th anniversary of the attack on the Moncada Barracks.

The Moncada Barracks was a military barracks in Santiago de Cuba, named after General Guillermón Moncada, a hero of the War of Independence, Wikipedia says.

On July 26, 1953, Fidel Castro led a small group of revolutionaries in an armed attack on the Barracks.

The attack is widely accepted as the beginning of the Cuban Revolution, which eventually toppled the dictatorship of Fulgencio Batista in 1959.

“We can tell you comrade Fidel, that history has absolved you and the combatants who attacked the Moncada Barracks in 1953,” Gonsalves said.

“It never amazes me the hypocrisy of the empire,” Gonsalves said.

“But the empire killing innocent people in Vietnam, in Iraq, in Afghanistan is not terrorists, they fighting for freedom. And they have the gall, the effrontery to declare Cuba a terrorist state,” Gonsalves said.

“They have this world upside down. What is truth is lie and what is lie is truth. That’s how they have it.”

He noted that the United Nations General Assembly, except the United States, Israel and the Marshall Islands, oppose the continued “criminal blockade of Cuba”.

“Roosevelt Skerrit is correct: we must use this forum again to demand the end to the criminal list and the removal of Cuba from the list of terrorist states across this world,” the Prime Minister said, quoting his Dominican colleague.

“The world, as we have it, is very complicated. Despite the behaviour of the empire we are all human beings and we have to engage one another in dialogue and we do so in dignity and in full support and defence of our fundamental principles,” Gonsalves said.

He further said that in addition to the celebrations in Cuba, two other events taking place over the next few days are inextricably linked: the commemoration of the birth of former Venezuela leader Hugo Chavez, who died in March; and a meeting of ALBA countries in Ecuador on Tuesday.

“All three events are inextricably interconnected. They are connected too with Raul and Fidel, the combatants at the Moncado, … they are also linked to Joseph Chatoyer, the anti-colonialist fighter of St. Vincent and the Grenadines,” Gonsalves said.

He noted the decision by CARICOM this month to seek reparations from Europe.

“We are demanding recompense, we are demanding reparation, from the European countries for native genocide and African slavery,” he said, adding, “… principal reason for under development in the Caribbean and Latin America is the legacy of native genocide and African slavery and we do so with the spirit and with the examples, in this new period, of the combatants of Moncada.

“The combatants of Moncada and the Cuban revolution have made Cuba and the world a much better place,” Gonsalves said.

“I want you, the Cuban people, to know that around the world, you are looked upon with great admiration. Do not allow the empire to distort your head with all kinds of foolishness. Treasure what you have, what you have worked for in the certitude that you are on the right track and to make life even better for our children and our grandchildren,” Gonsalves said.

He told the gathering of allied leaders that he is always happy to be in Santiago, where his grandfather worked for two years during the presidency of Gerardo Machado (1925–1933).

10 replies on “In Cuba, Gonsalves says ‘the empire’ has the world upside down”