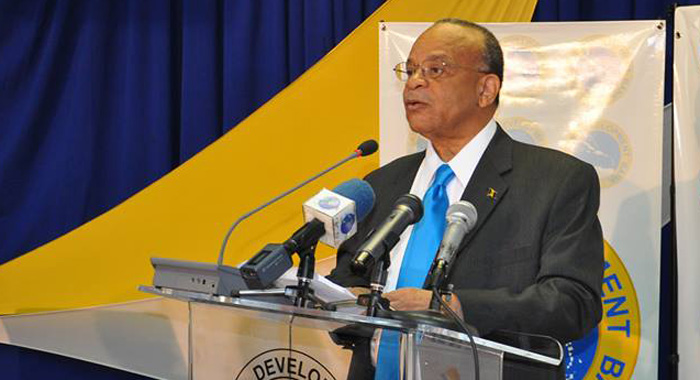 Chair of LIAT’s board of directors, Dr. Jean Holder, has apologised to the regional airline’s customers, saying that the public should have been informed earlier about the disruption in service that would result from the on-going re-fleeting exercise.

The apology came Friday in Barbados at a ceremony for the signing of agreements relating to a loan of US$65 million from the Caribbean Development Bank (CDB) to modernize LIAT’s Fleet.

The loan agreements provide for the loans to the LIAT shareholder governments — Barbados, Antigua and Barbuda, St. Vincent and the Grenadines, and Dominica — to be on-lent to, and repaid by, LIAT over a 13 years, following a two-year grace period.

LIAT is replacing its 20-year-old Dash-8 aircraft with ATR-700s and the SS$100 million re-fleeting exercise has resulted passengers in several destinations experiencing long delays and cancelled flights over the summer period.

“Apart from the monumental challenge of negotiating this sum of money (the US$65 million loan from the CDB), I wish to put on record that changing all your old aircraft for new aircraft of a different type, while training all your pilots and engineers in France to operate and service the new aircraft, while having the regulatory bodies in 21 different countries certify each new aircraft before it can operate to their country, simultaneously with continuing to operate a scheduled service to all countries at the busiest period of the year, and while the old aircraft continue to breakdown every day, is to say the least, an extremely difficult task. It has been hard on the public, for which I apologize, and it has been hard on the LIAT staff,” Holder said.

“On reflection the public should have been made aware much earlier of what LIAT was attempting to do, the timing of which was largely driven by external circumstances, and that disruptions in the service would be inevitable. At this point I promise you however that LIAT must and will do better,” he said.

He said that the light at the end of the tunnel is that by mid- January 2014, thanks to the CDB loans, seven of the 12 new aircraft will be in place and providing the public with “a better and more comfortable air transportation service across the Caribbean.

“We are also aware that the stresses and strains of the summer have tested the quality of our customer service and we are hard at work with a number of expert agencies in this area seeking to achieve the desired standards,” Holder further stated.

“It is not clear how they would otherwise have done their various socio-economic tasks if LIAT did not fly them. With the help of the new aircraft we hope to increase the number of passengers exponentially,” said Holder, who again spoke of the important of the airline to the region.

“Without the connectivity of regional transportation, many of the territories in the Caribbean are condemned to be the specks of dust which French President, De Gaulle, so disdainfully christened them a few decades ago,” he said.