With Camillo Gonsalves as UN ambassador, SVG ‘exercised influence beyond its size’ 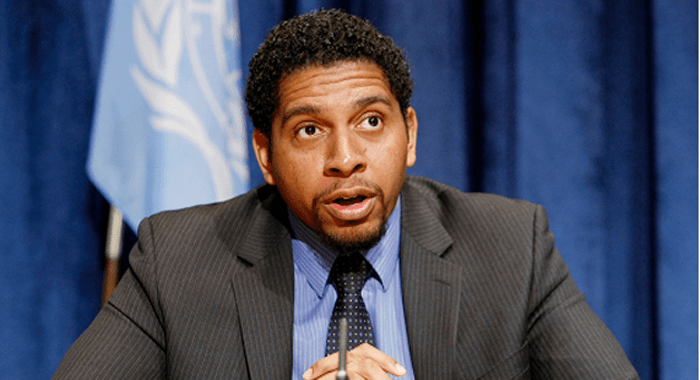 Outgoing ambassador to the United Nations, Camillo Gonsalves, says that during his five-year tenure, St. Vincent and the Grenadines “enhanced its international profile, expanded its network of friends, and exercised influence beyond its size in many spheres of international relations”.

The envoy told I-Witness News that overall, he thinks his stint “was a largely successful demonstration of the ways in which a small state can manoeuver in a time of international crises (economic crisis, energy crisis, climate change crisis, food crisis).

“I also think that we were successful in contributing to the debates on matters of global significance and having our voice heard as advocates for peace, development, equity, and adherence to international law,” he further told I-Witness News in emailed responses to questions.

At the United Nations, he has risen to the occasion amidst accusations of nepotism at home, surrounding his appointment on Nov. 6, 2007.

Prime Minister Gonsalves has said that his son’s diplomatic appointment was all the decision of his then deputy, former prime minister and minister of Foreign Affairs, Sir Louis Straker.

Ambassador Gonsalves served as Senior Crown Counsel in the Attorney General’s Chambers from August 2005 until his appointment.

While in that position, he advised the government on bilateral and multilateral issues and was a member of official state delegations to Ethiopia and to Libya in October and December 2005, respectively.

He told I-Witness News that there have been many memorable moments over the past five and a half years as ambassador.

“I think that Saint Vincent and the Grenadines’ leadership roles in the U.N. Conference on the Global Economic and Financial Crisis, the revitalisation of the U.N. General Assembly, the law of the sea, the marine environment, and Security Council Reform all stand out as moments in which our flag was lifted just a little bit higher on the world stage,” he said.

“Our on-going campaign to become the smallest nation ever to serve on the U.N. Security Council was also extremely memorable, and I hope that my successor will continue to build on the foundation we have to make this historic goal a reality,” Ambassador Gonsalves further told I-Witness News.

“My small role in assisting with some of the Government’s signature projects, like the laptop initiative and the construction of the international airport were also strong highlights. So too was the ability of our Permanent Mission to mobilize assistance for Saint Vincent and the Grenadines when we were struck by climate events like floods and storms. We were able to leverage our new and existing friendships to our national benefit — both for long-term development and short-term emergency assistance,” he said.

The envoy told I-Witness News he is proud of the role that he and his staff played in establishing new diplomatic relations with “a host of countries, large and small, rich and poor.

“We have looked to the East, and established ties with more countries in Africa, Asia, and the Middle East. Personally, I have travelled to scores of countries and had memorable discussions with a number of world leaders. I hope that I was able to maximize those opportunities,” he further stated.

He also spoke of his arrest in New York by police officer on March 28, 2011 in the lobby of his office building.

The government is still seeking redress after that incident.

“My encounter with the New York Police Department was also memorable, though, obviously, more difficult personally than many of the other memories that I’ve shared,” the diplomat said.

“I think though, that it was an invaluable teachable moment for all of us in Saint Vincent and the Grenadines who were willing to separate their personal like or dislike of me (and my father) and focus instead on the substance of the issues of sovereignty and independence that came into play.”

“I stood on the shoulders of my predecessors, and there is very little I could have helped to accomplish without their foundation.”

He praised the work of his staff and the staff at the Ministry of Foreign Affairs, saying it has been “invaluable, if oftentimes invisible”.

He also spoke highly of the “guidance and direction provided by Foreign Ministers Straker and Slater, to say nothing of the Prime Minister himself.

“There is not one single accomplishment that I could truthfully claim as my own. I merely contributed in a greater team effort,” he said.

He, however, said some accomplishments are tangible and measurable, “like the millions of dollars that I helped to secure for the airport, for disaster relief, for the laptop initiative, and for a number of smaller development projects.

“But I think that there has been even greater long-term value in the way in which our staff has been able to position Saint Vincent and the Grenadines as a vocal leader on the global stage. We are active and activist; principled and pragmatic.

“We have joined and championed a number of causes that have increased our international profile immeasurably. Now countries seek us out to hear our views on particular subjects, to explain their point of view to us, and to solicit our leadership and support of various causes. Saint Vincent and the Grenadines’ voice has become influential among developing nations, particularly island states. We have also become a very respected international player in the eyes of developed countries,” Ambassador Gonsalves told I-Witness News.

“In a less exciting, but equally important manner, I think that the staff of the Permanent Mission is more professional, more focused, more savvy, and more in tuned to the foreign policy of the Government and the opportunities that are presented by various changes in the global environment. We are well underway to developing a professional cadre of experienced international diplomats, who will continue to serve us well into the future,” he said.

Ambassador Gonsalves is on vacation ahead of formally relinquishing his position.

Prime Minister Gonsalves has said he has asked the diplomat to remain in St. Vincent saying there is work for him to do.

Speculations are rife that the diplomat will be appointed as a senator but he also told I-Witness News he does not have “any definite plan at this time” to enter politics ahead of the next general elections, constitutionally due in 2015

(Read also: Camillo Gonsalves again says he has no ‘definite plan at this time’ to enter politics before 2015)

2 replies on “With Camillo Gonsalves as UN ambassador, SVG ‘exercised influence beyond its size’”