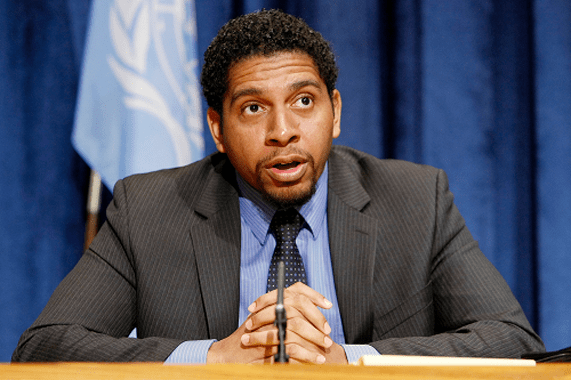 Outgoing Ambassador to the United Nations, Camillo Gonsalves, says he does not have “any definite plan at this time” to enter politics ahead of the next general elections, constitutionally due in 2015

“We should be focusing on governance and development today, not distant electoral events,” the diplomat told I-Witness News.

His comments come even as rumours continue that he would be sworn in as a government senator soon — with some reports saying it saying it could happen as soon as this week.

A source has told I-Witness News that the Unity Labour Party administration will make key changes soon that could include the diplomat, who was recently recalled after a five-year tour of duty.

The source told I-Witness News that Elvis Charles has confirmed that he will be removed from his senatorial position and will become chief executive officer of the Housing and Land Development Corporation.

Well-placed sources say that a public announcement could be made soon regarding Slater becoming second in command of a regional organisation.

But Ambassador Gonsalves, son of Prime Minister Dr. Ralph Gonsalves, has been the focus of many people’s attention, especially after his distinguished performance at the United Nations.

Some observers say that the younger Gonsalves could emerge leader of the Unity Labour Party when his father decides to step down.

Party insiders have whispered their support for the young Gonsalves, who they say will trump all other obvious contenders, including Minister of Agriculture Saboto Caesar, who like the diplomat, is also a lawyer.

Some ULP insiders have said that Ambassador Gonsalves, who is also trained in journalism and international affairs, will emerge winner of a leadership race, based on merit and even more so if nepotism is involved.

But all of these reports are merely speculation, if the ambassador’s own words are to be believed.

“The ‘dance card’ of candidates and seats for my political party is already filled with either excellent prospects or hardworking incumbents,” he told I-Witness News.

“I have said countless times in the past that people entering politics should ‘be on the ground’ before seriously contemplating such a move. ‘Being on the ground’ does not mean stepping off the plane one day, and declaring a candidacy the next,” said the ambassador, who returned to St. Vincent just over a week ago,” the ambassador said in emailed response to questions from I-Witness News.

“More broadly, I hope that I can make whatever small contribution to shifting the balance of our national discourse from this 24/7 discussion of electoral politics that is devoid of any substantive analysis of policy, programme and developmental philosophy.

“I am not particularly interested in our current cycle of daily sensationalism and scandalmongering, followed by the inevitable responses and countercharges. When we succumb to the daily he say/she say of electoral politics, we lose sight of the forest for the trees.

“Elections are important. Politics is important. But so are our plans for development, for surviving the economic crisis, for charting a course for the future, for putting more people to work. For providing more opportunities to young people. I’m much more likely to be animated by those conversations than an endless campaign and daily drumbeat of “who is running where, and when,” the diplomat told I-Witness News.

Regarding his plan for the next year, Gonsalves said he is on vacation and finishing his house, and making practical plans for his family and himself.

“Broadly, I hope to be able to continue contributing to national development and working in the public interest. But specifically, I couldn’t tell you the precise contours of how that contribution will take place.

“There are many, many, ways to contribute in the public interest. I have a background and professional experience that includes journalism, law, and international relations. Any of those fields — or a combination of all of them — are rich with opportunities for service and national development. I expect my plans to solidify and take shape in the coming weeks and months, but I don’t have anything to report at this time,” the younger Gonsalves told I-Witness News.

In this video, from 2012, Ambassador Gonsalves talks about his experience at the UNited Nations and politics in SVG.