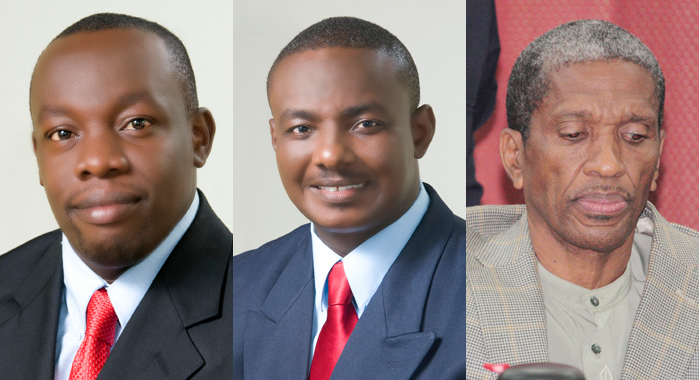 Three of the four government senators will make farewell speeches in Parliament later today (Thursday), as they prepare to demit office.

After weeks of speculations, Prime Minister Dr. Ralph Gonsalves announced shortly before midday that today’s meeting of the House of the Assembly is the last for Douglas Slater, Elvis Charles, and David Browne, in their capacity as senators.

“The Honourable Parliamentary Secretary in the Ministry of Tourism and Culture, the Honourable Elvis Charles, will be demitting office and will be taking up another appointment.

“The Honourable Senator David Browne and Deputy Speaker is demitting office to further his university education, both by distance and face-to-face learning,” Gonsalves said.

“I will, in time, before the end of this month, advise His Excellency, The Governor General, on the replacement for these three honourable gentlemen,” he further stated.

Gonsalves said that two of the new senators will receive “designation[s] in the executive of the State administration” and the third will be made Deputy Speaker of the House of Assembly, when the House resumes in early September.

The new senators will take the Oath of Allegiance in the Assembly Chambers in September.

“I want to thank all three Honourable Members for their excellent contribution to this Honourable House and for their tremendous service to the people of St. Vincent and the Grenadines,” Gonsalves said.

“Their service in other areas, I think that all reasonable persons would see as noteworthy and I wish them all the best for the future,” he further said, noting that his government is halfway through a third consecutive five-year term and is engaged in some refreshing.

Today’s announcement has further fuelled speculations that the Prime Minister’s son, outgoing ambassador to the United Nations, Camillo Gonsalves could be appointed a senator and Minister of Foreign Affairs.

The younger Gonsalves is on vacation ahead of formally relinquishing the position after five years of critically acclaimed, distinguished service to the nation and the region.

There are also talks that Luke Browne, who lost to Opposition Leader Arnhim Eustace in 2010, could also be appointed a senator.

The nation is still undecided on its view of Browne after a letter he penned this year triggered a run on the 72-year-old Building & Loan Association, further jeopardising its future.

I-Witness News has reported in the past, citing well-placed sources, that Sen. Charles will be made manager of the Housing and Land Development Corporation. He has since confirmed this in an interview with a local newspaper.

We have also reported that Sen. Slater will be appointed second in command of a regional organisation.

We are comfortable now, after the Prime Minister’s announcement, in saying that our source says Slater will take up an important position at the CARICOM Secretariat.

Gonsalves said the changes to the senate are part of wider changes in the Government.

He said that the Cabinet Secretary, Susan Dougan, who reached retirement age over a year ago, has indicated that she has personal matters to which she would like to attend.

Gonsalves further said there is “a very distinguished public servant” that he hopes will be appointed to that position.

There will also be be a new director of the Community College, Gonsalves, said, and noted that there is a new acting Commissioner of Police.

“So there would be several changes which are taking place in the administrative arm of the government, in addition to the political administration,” he said.

The other government senator, Minister of Works, Julian Francis, who was appointed since Gonsalves’ Unity Labour Party (ULP) came to office in 2001, retains his position.

Francis, one of Gonsalves’ cousins, is also General Secretary and Campaign Manager of the ULP.

Update: Sen. Slater told I-Witness News Thursday afternoon that he “would not be ‘second’ in command of the institution where I will soon take up a post”. He, however, said he was “not at the moment” in a position to say what the position would be.