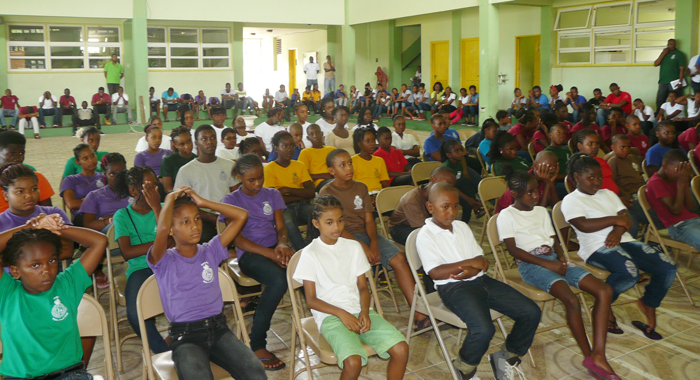 Members of the Police Youth Clubs.

Acting Deputy Commissioner of Police, Frankie Joseph, says he is elated that 164 children and youth from throughout St. Vincent and the Grenadines have seized the opportunity to attend the 2013 Police Youth Clubs Summer Programme.

Joseph, delivering the feature address at the camp’s opening ceremony on Saturday said he is happy to identify with an organization, which is contributing to building a better and brighter future for children and youths across the state.

“I will like to remind us that in order for us to have a better tomorrow, we must be able to create a better today. This summer camp is one step towards achieving that goal,” Joseph said.

Joseph remarked that generally most adolescents and teenagers are on a path, which leads to them becoming productive adults. However, there are those who are at significant risk of veering off that path because they may engage in behaviours with negative consequences, such as drug abuse, alcohol use, unprotected sexual activity or violence. He said that the leadership of the Royal St. Vincent and the Grenadines Police Force (RSVGPF) cognizant that a number of cultural influences lay the foundation for some of the problems facing children and youth, has strategically initiated the Police Youth Clubs to alleviate factors that create risk and negative social behaviours.

Joseph added that the activities put on by the Police Youth Clubs are strategically designed to help equip children, youth and parents with essential tools that they need to make safe and healthy choices. He further stated that they also give the participants the facts that they need to know about illicit drug use, under-age drinking, self-control strategies and alternatives to make the best decisions when they are confronted with challenging situations.

“Many of our youth are provided with the opportunity to take on leadership roles in the various clubs, which allows them to advice their peers on youth centred issues, while empowering themselves. Most importantly, the programme sensitizes and helps our young ones have an appreciation about being law abiding citizens, and making them aware of the implications of breaking the law,” said Joseph.

The Acting Deputy Commissioner of Police also said that in addition to providing the children and youth involved in the 24 Police Youth Clubs with the tools for being responsible, safe and crime-free, the programme also allow parents the opportunity to be directly involved in the development of their children.

Police Youth Clubs and the district coordinators, all police officers, for the work that they are doing. He also pledged the leadership of the RSVGPF continued support for the programme.

“It is evident that the programme continues to reap success, however, we cannot rest on our laurels. As we provide the children and youth of this country the opportunity to develop positive behaviours, we are still faced with the challenge where a number of our juveniles are engaging in illegal activities,” Joseph said. He added: “To this end it is imperative that we renew our efforts by developing effective strategies that provide opportunities for education, mentoring, conflict resolution training, and safety of our children and youth.”

Sergeant McMaster delivering remarks stated that during this year’s camp participants will be lectured on a wide array of topics including human trafficking, sexual offences, HIV/AIDS, drugs and its effects, and the impact of crime on young people. She said that they will also engage in art and craft as well as drills.

The Police Youths Clubs are interactive organizations under the ambit of the RSVGPF, which engage participants through various activities such as presentations, lectures, camps, field trips, physical training, drills, games and sports, church service, talent display and cake sales.

The curtains will come down on the 2013 Police Youth Clubs Summer Programme on August 19, 2013.