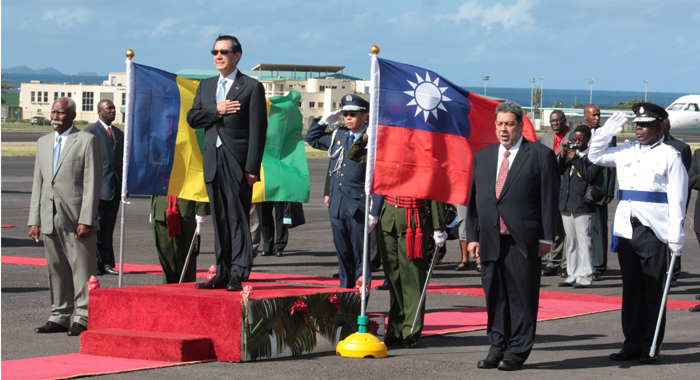 President of Taiwan, Ma Ying-jeou, was welcomed with military honours when he arrived in St. Vincent on Saturday. (IWN photo)

President of Taiwan, Ma Ying-jeou wrapped up Saturday night a one-day visit to this country, during which he met with state officials, planted a tree, and attended the officially opening of a Taiwan-funded bridge.

Ma and his delegation landed at the E.T. Airport shortly after 8:30 a.m.

There was also a guard of honour and his arrival was marked by a 21-gun salute.

The president and his delegation proceeded to the botanical gardens in Kingstown, where he planted a wax apple tree.

He then met with Governor General Sir Frederick Ballantyne at Government House.

In signing the guestbook, Ma left a wish for eternal friendship between Taiwan and St. Vincent and he Grenadines.

He then travelled to Colonarie, where he participated in a ceremony to officially open the EC$3 million Colonarie Bridge.

Speaking through an interpreter, Ma said at the ceremony the cooperation projects between both countries have been bearing fruit in the areas of infrastructure, agriculture, healthcare, information and communication technology, human resources and cultural exchange.

“St. Vincent and the Grenadines has always been a strong advocate of the Republic of China on Taiwan on various international occasions. This fully demonstrates the friendship, justice and love and genuine friendship between our two countries. And what we do today is only a small token of paying back to your great nation,” he said.

He said in English: “The English saying goes, ‘A friend in need is a friend indeed.’ So this is a true reflection of the long friendship between our two countries. So, once again, I want to tell you I wish our friendship will last forever, just like the bridge.”

At the ceremony, Prime Minister Dr. Ralph Gonsalves spoke highly of Taiwan’s contribution to the development of SVG.

He also restated the point that hard work is essential for national development and said Taiwan is a prime example of this.

“And this is where our relationship with Taiwan is so critical. I think of all the countries with which we have close relations, this is the one, which teaches us this lesson best of all,” he said.

The president and his delegation lunched at the private residence of Prime Minister Gonsalves.

Ma and his delegation also visited the terminal building at the construction site of the international airport in Argyle.

The terminal building is funded by Taiwan and is being constructed by a Taiwanese firm.

Ma then returned to Kingstown, where he met Gonsalves before both leaders signed a joint communiqué.

The president also attended a reception hosted by Taiwan’s ambassador to this country, Weber Shih.

At the reception, he presented a scholarship certificate to a representative of the 17 students who will receive various scholarships from Taiwan this year.

He is engaged in a five-nation diplomatic tour and arrived in St. Vincent from St. Lucia.

He also visited Haiti, and Paraguay.

One reply on “Taiwan president wraps up official visit to SVG”