Positive economic impacts of an international airport: a comparative analysis

Let’s face it, the metamorphosis of globalization is upon us. People, companies, and nations are integrating and interacting more. The movements of services and goods globally requires logistical infrastructure that would accommodate the rapid pace of an integrated world. Hence, an international airport is a major apparatus of a nation’s infrastructure to generate economic activities — such as international trade and tourism. International airports offer increased accessibility, which in turn fuels the tourism sector. With an increase in the number of visitors and airport users, more money flows into the local economy.

St. Vincent and the Grenadines is a member of the Organisation of Eastern Caribbean States (OECS). The OECS is a nine-member grouping, comprising of Antigua and Barbuda, Dominica, Grenada, Montserrat, St Kitts and Nevis, St. Lucia and SVG, Anguilla and the British Virgin Islands (BVI is an associate member of the OECS) (OECS.org). Except for the BVI, the other eight members of the OECS use the same currency (Eastern Caribbean Dollar), has similar culture and geographical resemblances. Therefore, the islands are ideal for a comparative measurement of gross domestic product (GDP) — those with an international airport and those without. GDP is the market value of all final goods and services produced within a country in a given period of time. Therefore, it is an important measurement of a country’s productivity. To state differently, in a simple manner, it is the health of a nation’s economy — the greater the number, the healthier the economy, ruling-out inflation. So, let me demonstrate the importance of an international airport, in relationship to GDP, using 2012 GDP, measured in current prices in U.S. Dollars. OECS members with international airports all have larger economies, respectively. OECS members with international airports are: Antigua and Barbuda: GDP US$1.2B, Grenada: GDP US$0.881B, St. Lucia: GDP US$1.3B, and St. Kitts and Nevis: GDP US$0.771B. OECS members without international airports are: Anguilla, Dominica: GDP US$0.517, Montserrat, and St. Vincent and the Grenadines: GDP US$0.741B. 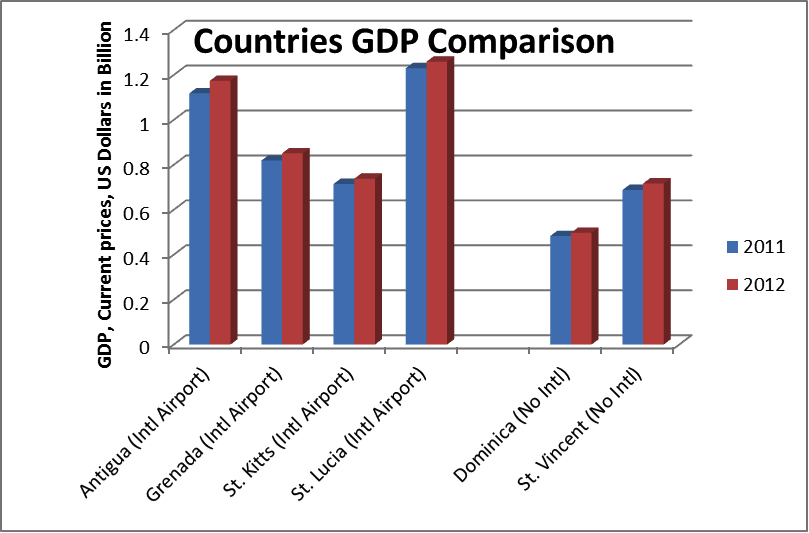 Other positive impacts are Direct and Multiplier impacts. Direct impacts are economic activity generated by airports — such as the purchase of aviation goods and services, and spending of airline passengers passing through the region. Multiplier impacts, however, result from the re-circulation and re-spending of direct impacts within the economy. This re‐spending of cash can transpire multiple times and takes two forms — indirect and induced. Indirect impacts occur when businesses spend their revenue on expenses; whereas, induced impacts occur when employees purchase goods and services. For example, as airport employees spend their salary for housing, food, and services, those expenditures circulate through the economy resulting in increased spending throughout the economy. So, accordingly, the probability of St. Vincent and the Grenadines economy to growth because of an international airport is favourable.

In closing, the positive impact of an international airport on a country’s economy goes well beyond the airport fence. We’re in the midst of globalization, and St. Vincent and the Grenadines, with its natural beauty (sun-sea-and sand), has the potential of becoming one of leading tourist destination of the world. So while the capital project is beyond the scope of all previous ventures — the largest thus far — the project is essential for the development of the Land of the Blessed.

6 replies on “Positive economic impacts of an international airport: a comparative analysis”