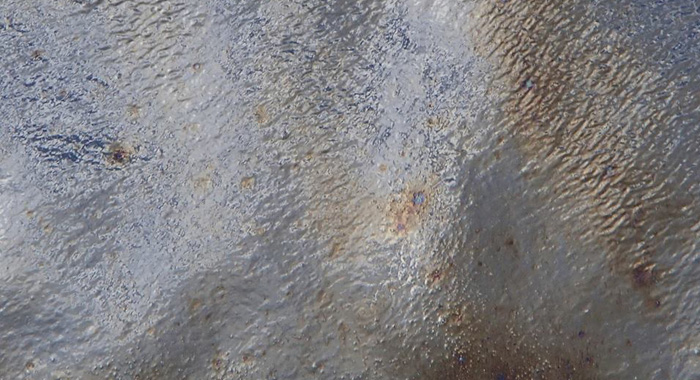 A section of the oil spill. (Photo: NEMO)

Noxious fumes from an oil spill in the Kingstown harbour sickened students, teachers and residents, resulting in the authorities closing the J.P. Eustace Secondary School in Edinboro on Friday.

Early Friday morning, diesel began floating up from the vicinity where the ship sank.

The Dr. J. P Eustace Secondary School was closed Friday morning due to the strong smell and 17 students, three teachers, and two residents were treated at the Milton Cato Memorial Hospital and later discharged.

One emergency worker was also hospitalized after complaining of being dizzy while working at the site, NEMO said.

NEMO has urged persons living in the area to temporarily relocate or to take precautions if they are unable to.

The disaster management agency said it has put together a task force to deal with containing and cleaning up the oil spill in the Edinboro area.

The task force includes personnel from fuel companies SOL and Rubis, the Coast Guard, the Public Health Department, Traffic and Fire Services of the Police Force, Maritime Administration and the Central Water and Sewerage Authority.

NEMO said the Public Health Department is advising persons in the area as follows:

• Persons who are unable to temporarily relocate are kindly asked to limit the amount of time spent in the affected area.

• Persons residing in the area are kindly asked to limit the intake of beverages such as soda, juice, etc. to drink at least 8 glasses of water.

• Persons who become nauseated are kindly asked to report to the hospital for observation.

• Persons in the affected area are kindly asked to keep all belongs inside such as clothing and keep the windows and doors closed as a mean of precaution.

(EDITOR’S NOTE: The National Emergency Management Organisation — NEMO — can be reached at telephone number 456-2975. In cases of medical emergencies, fires, or to report a crime, dial 911. Click to follow NEMO on Facebook)