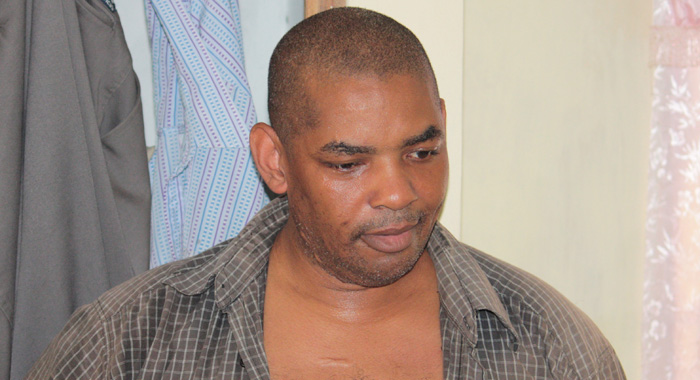 A 44-year-old Diamond resident says he is being targeted because he assisted a man who was injured during a robbery, and told police what he knew of the attack.

“They say they will smoke me out and they [did] throw the firebomb,” Cornelius Joseph, a driver at the Physical Planning Division told I-Witness News on Saturday.

The firebomb was thrown two years ago and Joseph, with help of a neighbour, put out the blaze.

On June 13 this year, shots were also fired into Joseph’s house.

He distinctly remembers June 13 as the day when a police officer was shot during a robbery in Kingstown.

He said it is rumoured that the person who committed that crime lives in or frequents the lower section of Diamond — closer to the coast.

“Thursday night, Friday morning, about 3-4 o’clock, they shoot up the place. The police got all the bullets…” he told I-Witness News.

While Joseph was not injured, shots went through the mattress of a bed, and impacted on the floor and wall of the room.

Joseph has been living in the house, which is still under construction, for the past four years.

He says that while he does not exactly know the reason behind the attacks, they began after he assisted the robbery victim and told police what he knew.

“And since that, is tribulation here for me,” he said, even as he praised the police for quick response whenever they are summoned.

Joseph further said that he believes that he is being targeted because he taught a member of the Rapid Response Unit (“Black Squad”) to drive.

He further said that police patrol the area about twice a week, both night and day.

Joseph told I-Witness News that thieves broke into his storage shed and stole 35 lengths of reinforcement steel, sacks of cement, tools, and other items.

Human faeces have been thrown into his patio repeatedly, he further said.

He further showed I-Witness News a note in which someone threatens to “f… u up”.

He said that before his house was firebombed, a passer-by in the road that boundaries his house, had told him that he would “smoke you out”.

“I just have to take the threat from them and just –I don’t know. They are just out to kill me. It’s not me alone in Diamond. A lot of people are faced with a lot of problems.”

He said that another neighbour was robbed and hit with the butt of a gun twice, causing injuries to his head.

Joseph, who had a vehicle at the time, transported the injured man to the hospital.

He said that he no longer has the vehicle, which was subsequently vandalised.

“I am targeted because I assist police with certain people who do certain things and the police catch some of them, lock up some of them.”

He said that police have been saying that a lot of people frequenting the area are known criminals from Kingstown.

“And you know once you help the police, they target you,” Joseph said.

He said that while streetlights have been installed in the area, gunshots continue to ring out night after night.

To his tormentors, he sends this message: “I am just a struggling, humble man. I am not a thief man. You can’t just go in people’s place, thief people thing or try to kill people for their things or if [they] help somebody.”

He said that the neighbour that he assisted after the mugging was one of his best neighbours.

“If he was my enemy, I would have still carry him to the hospital. So you can’t target me for that. … I don’t trouble people. I never go courts different to a traffic case,” he said.

He said that sometime when gunshots are fired in the area, other neighbours would call the police and people would assume that he did.

Meanwhile, one of two other residents in the area that I-Witness News attempted to talk to was reluctant to speak.

When the two journalists who visited the area indicated that they were journalists and not police officers, a young woman remarked, “Oh, because I don’t like police.”

She however said that police patrol the area frequently, and gunshots are often heard in the area.

Another resident, who has been living in the area for more than a decade, said, “multitudes of gunshots” are heard in the area.

He described one section of the area as Afghanistan, another as Libya, and another as Iraq.

“It’s a danger all the time,” he said, adding that people have to be careful when walking at night.

The resident said that to stop the shooting, the police should get the owner of a parcel of land with some medium-sized trees on it to cut down the trees.

He said gunshots are often heard from the area and people have been shot there.

“It is a sad, sad thing what is going on here and you can’t find the solution.”

He said a lot of foreigners frequent the area he described as Libya and said it is rumoured that the person who shot the police officer on June 13 lives there.

The resident said he has taken steps to protect himself, his family and his property.

He further said that while police visit the area, persons at the top of the valley use cellphone to tell those lower down that the police are on patrol.

Regarding Joseph, the resident said, “I don’t know why they are out for that guy.”

He further described Joseph as “quiet and nice”.