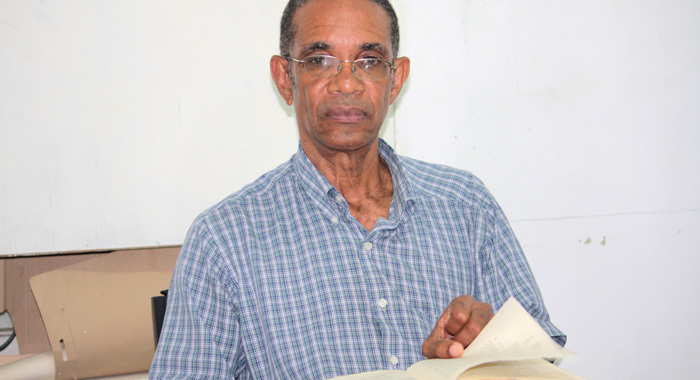 Cools Vanloo has taken the PSU to court over his removal from the presidency of the Union. (IWN file photo)

A special meeting of the Public Service Union (PSU) on Tuesday disbanded the executive and appointed an interim committee to lead the organisation until a new executive is elected.

But Cools Vanloo is maintaining that he is still president of the PSU and that Tuesday’s decision is contrary to the union’s constitution.

Vanloo’s assertion comes even as chair of the interim committee, Elroy Boucher, told I-Witness News “the Government has no time with Cools Vanloo”.

Boucher further said he would support Aubrey Burgin or former cabinet secretary and chief personnel officer, Bernard Morgan, two other members of the interim committee, to lead the union.

The interim committee, in a statement on Wednesday, said that the special meeting was called “to discuss matters relating to the functioning of the Executive committee and to chart a way forward for the Union”.

The release said that the meeting, which Vanloo chaired, “had some very heated discussions with serious accusations being levelled against the President and other Executive members, which were deemed detrimental to the proper functioning of the Union”.

The counter motion was defeated in a vote and at this point, Vanloo declared the meeting adjourned, a decision that was not seconded, the release said.

“He, along with a few members, walked out of the meeting,” the release said.

The remaining membership asked the general-secretary to chair the remaining part of the meeting.

The motion for the removal of the entire executive was voted on and succeeded by a vote of 32. Three persons did not vote, the release said.

The release further stated that an interim committee was elected and mandated to run the affairs of the union and to hold a general meeting within one month to elect a new executive.

The new executive’s term of office will include the period up to March 2014, when the term of Vanloo’s executive ended, and the two-year term 2014-2016

Vanloo told I-Witness News on Wednesday that the special meeting resulted from an Aug. 9 letter in the newspaper by then newly elected First Vice-President, Leroy James, which, among other things, accused Vanloo of being dictatorial.

Vanloo said that at the special meeting, certain allegations, similar to those in the newspaper, were raised, including that he didn’t want to talk to Prime Minister Dr. Ralph Gonsalves.

But Vanloo showed I-Witness News a letter he wrote to Gonsalves — who is also Minister of Finance — on April 10, regarding salary/wages and benefits negotiations for the 2012-14 triennium.

He said that Gonsalves never responded to the letter.

“So the allegation that I don’t want to speak to the Prime Minister is groundless,” he said.

He said that whatever the allegations against him, the business of the union had been going on and he took to the meeting on Tuesday a list of the accomplishments of the union and proposals for the way forward.

Vanloo said that during the meeting, matters were raised, including motions for the removal of the president, the general-secretary, the treasurer and the whole executive.

He said that he repeatedly cautioned the meeting that those motions could not constitute the business of the meeting since they were not specifically on the agenda.

He further said that the constitution of the union is specific about the tenure of the executive, and that officers elected at the annual meeting should serve until the next election.

Those officers are eligible for re-election, except the general-secretary and the treasurer, who shall hold office at the pleasure of the executive, he explained.

He said there were no votes on the motions, although they were put to the floor.

The meeting fell into “disarray”, with members shouting at each other, he said.

“No one was listening to the chair. On the basis of that, since the meeting couldn’t be brought to order, I don’t know if it is the authority of the chairman [but], I adjourned the meeting and left the meeting with some members of the general membership.”

He said he knew of the election of the interim committee when the media contacted him around midday on Wednesday asking him to comment on the development.

“If there was an intention to remove the executive and you are giving a notice to members, it should be stated in the notice. If that is the case, resolutions should have been submitted to the executive prior to the meeting,” Vanloo said, citing the constitution of the union.

He added that he did not see anything in the union’s constitution that “gives credence” to an interim committee.

“I don’t know by what authority they have taken over the union and the grounds for doing so. If it is a disciplinary matter, there is a mechanism in the constitution to deal with that.

“The union is being hijacked,” Vanloo said.

Meanwhile, Boucher, when asked separately on Wednesday about Vanloo’s assertion that the PSU’s constitution does not provide for an interim committee, told I-Witness News:

“Frankly speaking, Cools just needs some help… It is a voluntary organisation. If the people say that they don’t want you, why are you fighting to hold on to…?” Boucher said.

“Even if you were to say, for argument sake, ‘Ok Cools, you are right,’ where is the executive? They have all left. So, he stands alone and he doesn’t have a majority,” Boucher further told I-Witness News.

He added that the interim committee “is only there to prepare for elections next month”.

Regarding the allegation that Vanloo does not speaking to the Prime Minister, Boucher said,

“If you ask me, frankly, I will tell you, the Government has no time with Cools Vanloo … When you have meetings, who do you dialogue with in this country? We know what is our local situation. You have dialogue with the government, whether it is with the prime minister or the minister, whichever minister, because your biggest membership is public servants.

“But when it comes to the government of the day, Cools seems to have a problem with the Government,” Boucher said.

He said that when he was general secretary, a motion was brought to the membership of the union to remove him from office because he led a delegation to have budget consultation with the Prime Minister, as agreed by the majority of the executive.

“He (Vanloo) said it is not happening,” Boucher said of the development, which reportedly took place two years ago.

Boucher said that he led the delegation because of the majority mandate.

“When it comes to the Prime Minister, he (Vanloo) has a problem with the Prime Minister. I have witnessed things — very embarrassing. I don’t want to talk about all those things because that is the past. But, from my own experience — and I serve there for eight years, fours years with him — I know what transpired.”

Boucher told I-Witness News said that Vanloo’s executive was “very weak and could not hold things together” and that dirty linen was washed in the press.