LIAT is ‘not a business like other businesses,’ Gonsalves says 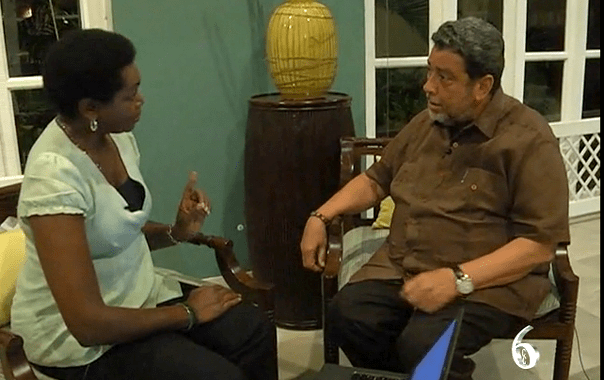 It is generally good business sense to only invest in viable enterprises.

But when a journalist made that statement to Prime Minister Dr. Ralph Gonsalves in Grenada in relation to LIAT, it seemed to unsettle him.

Gonsalves was being interviewed by Beverly Sinclair on a range of issues, including LIAT, in which St. Vincent and the Grenadines, Barbados, Antigua and Barbuda, and, to a lesser extent Dominica, are the major shareholders.

“What I would like to take the opportunity to do is to repeat what Chester Humphrey, the head of the union here (in Grenada), says, the plea that he made for … other governments to come aboard,” said Gonsalves who is chair of LIAT’s shareholder governments.

“It is just not fair to have three governments and now Dominica has come in an important though small way,” said Gonsalves, who is also CARICOM’s lead spokesperson on air transport.

“But, Dr. Gonsalves, if you have a business and you are asking investors to come and put money in it, it should be a business that’s viable,” Sinclair told Gonsalves.

The journalist further accused the Prime Minister of making an assumption regarding what she knows.

He further stated that when his Unity Labour Party government decided to invest in LIAT shortly after coming to office in 2001, he told Parliament that he was investing in an insolvent company.

He further noted that he told lawmakers then that if LIAT didn’t exist it ought to have been invented “and that the important thing is for us to get involved in that company, put money in it to try to make it better”.

Over the past few weeks, as LIAT implemented its re-fleeting exercise, the airline’s passengers have had to endure frequent flight cancellations and inordinate delays.

Gonsalves said that “until this recent problem, we have made it (LIAT) better than what it was in 2001.

He said governments of the countries served by LIAT should support the airline.

“LIAT brings passengers just as much as American Airline or Virgin or British Airways or any of them.

“… This is why I make the point with crystal clarity. A regional airline of this kind, this is not anything which is going to make money. This is a service that has to be provided and we seek, if we can break even with this service, fine. But you cannot make money out it.”

Gonsalves said that the same investment criteria as for a hotel or a beer factory cannot be used in relation with regional transport.

“Otherwise, you will stay here and can’t go Jamaica,” he told the journalism, who accused him of using personal slurs — which the Prime Minister denied.

The journalist restated her point that one does not put money into a business that is not doing well.

Gonsalves retorted that they are going around in circles.

“But isn’t it a business?” the journalist asked.

Gonsalves at this point, seemingly frustrated by the repeat of the question, kissed (steups) his teeth and slapped both hands against his thighs.

“It is a simple thing if you don’t understand it,” he said after a pause.

“Isn’t it a business?” the journalist asked again.

“I just explained to you that it is not a business like other businesses. To ask in a puerile sense ‘Is it not a business?’ Of course it’s a business but it is a business of a different type. That’s the point I am making,” he said.

“So it’s not a business designed to make a profit?” the journalist asked.

“I just [told] you that a regional airline like LIAT, which is going about here, don’t look for it to make any profit. I tell you if it breakeven, you are going OK. There are a lot of countries, which subsidise their airlines. I am not calling for perpetual subsidy of airlines. I am not calling for that. If the cost of LIAT was to be borne by the users of the service, it would be far more expensive than it is at the moment,” he further said.

Asked how, without the subsidy, the balance is going to be maintained, Gonsalves said:

“Well, what we try to do, frankly speaking, is to see if we can break even, if we can made a very modest profit, so be it.”

8 replies on “LIAT is ‘not a business like other businesses,’ Gonsalves says”