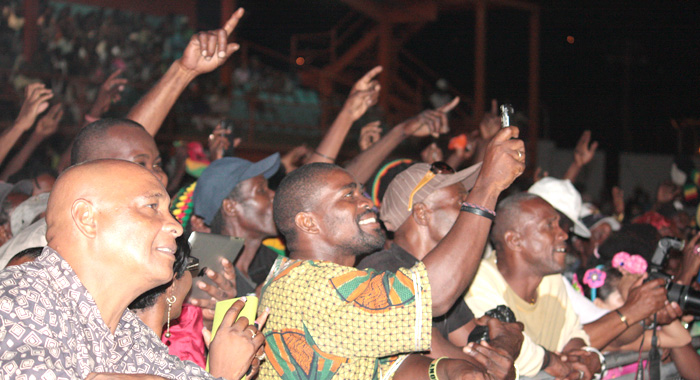 Persons enjoy a performance by Jamaican reggae artiste, Bunny Wailer at the opening of the Regional Reparations Conference on Sunday. (IWN photo)

The first Regional Reparation Conference opened in Kingstown on Sunday with speeches from regional delegates and a live performance by Jamaican reggae legend, Bunny Wailer.

Chair of the St. Vincent and the Grenadines Reparations Committee, Jomo Thomas, said the day was historic in that many persons will look back at it and conclude that “on this day in this place, in this country, the movement for reparations for genocide against the indigenous peoples of our region and for the fight to seek reparations for the enslavement of our people really took off”.

CARICOM leaders at their meeting in Trinidad in July agreed to the formation of a region-wide Reparations Commission to seek compensation from Europe for native genocide and enslavement of Africans during colonisation.

Thomas, a lawyer who has worked in reparations in the United States, says the struggle for reparations will not be easy.

He however said struggle took a real jump with the decision of CARICOM at the 40th anniversary meeting in Trinidad.

The strategy going forward will be to seek Reparations from the English the Dutch and the French, Thomas said.

“As the movement gains momentum, there will be a larger fight to include all of the colonial powers,” he further stated.

Lashley, who was speaking on behalf of Prime Minister of Barbados and head of the CARICOM Reparations Commission, Freundel Stuart, also congratulated St. Vincent and the Grenadines on establishing its own reparations committee and also encouraged states that have not done so to act quickly.

“As you contemplate the composition of your respective committees, I commend to you the part which we have followed in Barbados by insisting on balanced representation from government, civil society, faith groups, ethnic groups, academics, activist, and gender,” Lashley said.

“This avoids the pitfalls of an unbalanced, top-down, government approach even while further consensus is sought through community dialogue,” he further stated.

He noted that in the Caribbean reparations is not new and added that a debt of gratitude is owed to non-governmental organisations and civil society, in particular the Rastafarian community, for keeping the subject alive as they sought to build awareness and dialogue over the years.

“This issue of reparations, complex and volatile as it is, has certainly raised grave misgivings within certain sectors of the Caribbean society, forcing its relegation over the years from mainstream policy consideration. I’m pleased to know that recent national and recent governmental, regional initiatives have signalled that this is about to change,” Lashley said.

And, Prime Minister Gonsalves said that as a mode of proceeding, he advocates the building of solidarity ties with like-minded persons and groups overseas, including in Europe.

He said CARICOM must strive to build support across national and ethnic lines.

“… we have to build consensus. We don’t have to fight with one another. We may have different perspective but this is a huge movement, historic in this 21st Century,” Gonsalves said.

“We must be up to the task and leave the trivia out and when any of us does wrong in this movement, we must say, ‘Brother, sister, comrade, that is not the way to proceed.’ Let us proceed in unity and let us build alliances with our European friends, because we require our European friends, people from all across the world, the brothers in Africa, in Latin America, in Asia, we need the support everywhere.

“This is a global project of immense significance in order to make ourselves more free, more human. I say that as a consequence, we must act accordingly,” Gonsalves said.

“For starters, next week, at the General Assembly of the United Nations, … for each head of state, each head of government, each foreign minister, to insert in their statement to the world at the General Assembly a strong and positive message on reparations. You can rely on the Prime Minister of St. Vincent and the Grenadines to have such a statement in his presentation to the United Nations,” Gonsalves said.

In delivering the feature address, Professor Verene Shepard of the University of the West Indies, said that the reparations movement will take its place alongside the defining moment of the post colonial Caribbean.

“For here we are, gathered in ‘Freedom Park (Victoria Park) in this year to honour those who have gone before, so that other can follow and to chart a way forward to seek redress for those who suffered brutality at the hands Europeans during the period of conquest, during the reign of terror on indigenous people, during colonisation, the transatlantic trade in captured Africans, African enslavement and post slavery indentureship and other regimes which were used to recreate the slave relations of production,” she said.