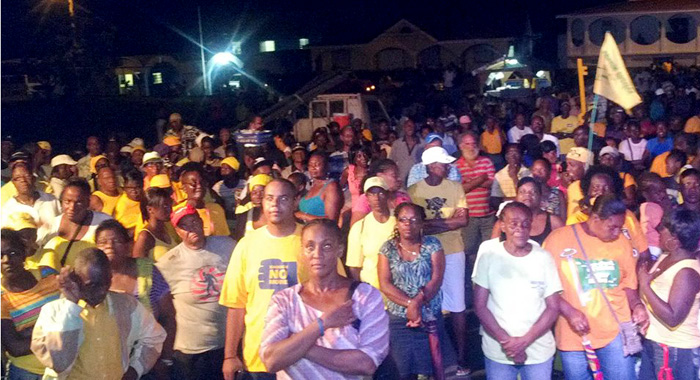 A section of the crowd at the NDP’s rally in Barrouallie. (Internet photo)

The Opposition New Democratic Party (NDP) says it has selected candidates for all 15 constituencies ahead of the next general elections, constitutionally due in 2015.

NDP head, Opposition Leader Arnhim Eustace made the announcement Saturday at a rally in Barrouallie.

“I have come here tonight a very happy man because I now know that we have our 15 candidates for the next general election,” Eustace told party supporters.

“We have been before you all the time predicting what was going to happen in St. Vincent and the Grenadines since the last elections (December 2010), and I think you can now say that we were right. Things real hard in St. Vincent and the Grenadines,” said Eustace who this year told party supporters that he is expecting general elections by year-end.

Eustace also introduced at the rally Ben Exeter, the NDP’s candidate for Central Leeward, the only seat that the ruling Unity Labour Party retained on the leeward side of the country in the 2010 vote.

“I know Mr. Exeter pretty well. I am not seeing him for the first time. I have known him for some years now. And I am happy that he has come forward to serve the people of this area — very happy indeed,” Eustace said.

He again thanked former candidate, Norrel Hull, who failed four times to win the Central Leeward seat for the NDP.

“And he is being replaced by someone who I know will do a very good job,” Eustace said.