Luke Browne ‘knew off the bat’ that he wanted senatorial post 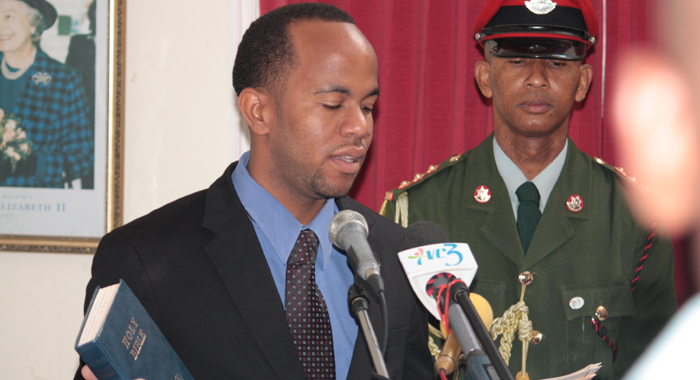 Luke Browne, who ran and lost for the ruling Unity Labour Party (ULP) in East Kingstown in 2010, says he accepted the senatorial position as soon as it was offered to him.

Browne, along with Jomo Thomas, and Camillo Gonsalves — son of Prime Minister Dr. Ralph Gonsalves — were announced as senators on Monday.

“I knew that is the way in which I would like to serve. Of course, you have to deliberate and you have to think what’s best at this stage of your career, but I knew off the bat that it is something that I’d be very interested in doing so I was grateful that the Prime Minister gave me the opportunity to serve the country in this way,” Browne told I-Witness News on Monday.

“Naturally, I don’t expect it to end here. I always have the view that the best is yet to come so I don’t know what my later years will find me doing so there are few things that I would like to achieve as well,” said Browne, who was sworn in as Parliamentary Secretary in the Ministry of Tourism, Sports, and Culture.

Browne, who lost to Opposition Leader, Arnhim Eustace in 2010, said he is considering contesting the next election, constitutionally due in 2015.

“We would see how that works out. I want to give effective representation in one respect now in Parliament as a senator but of course the opportunity to serve as the representative for the people in East Kingstown is not something I would shy away from at all and in fact, I have been working hard in that respect and I think there is nothing else as forceful as a person or an idea whose times time has come. And maybe my time will come in the next election to represent the people of East Kingstown,” the former national scholar said.

Browne has represented St. Vincent and the Grenadines as an under-15 and under-19 cricketer.

He also has experience in competitive football, track and field, and swimming.

“So, I have a broad cross-section of sports that I have been involved in and I happen to think that it is important for us to develop the sporting talent of our people,” he said.

“We have seen what could happen if individuals who have talent receive training. Caribbean athletes perform very, very well at the Olympics and the only thing that perhaps could be getting between the potential of a Kirani James in St. Vincent is the facilitation by way of training and what not.”

Browne said he recently saw an article which suggests that there was going to be an after school training programme to be piloted in St. Lucia.

“That’s one of the things I would actually like to come to St. Vincent because, you know, there is some idleness on some level and if we can address that through sports, which are almost universally loved, I think we would make one progressive step,” he said.

He further stated that while such programmes exists, “perhaps we can do more and maybe we can contribute to furthering that cause.

“That said, there are other aspects of the portfolio including culture, and, at this time when we are seeking reparations, I think our culture or resistance should be emphasised and it is something that I would like to pursue in some way during the execution of my duties.”

Browne said he was inspired by some of the information presented during the opening of the Regional Reparations Conference at Victoria Park on Sunday.

“I, of course, have my own statistical background and I think I could do some research in terms of quantifying some of the victims of a cost, the damages we have suffered as a result of our historical experience with slavery,” said Browne, who has an undergraduate degree in economics and mathematics, and a master’s degree in statistics.

“… of course, as you go along you will be able to see and identify other needs and address those needs,” Browne said.