Ahead of announcement, Opposition MP weighed in on new senators 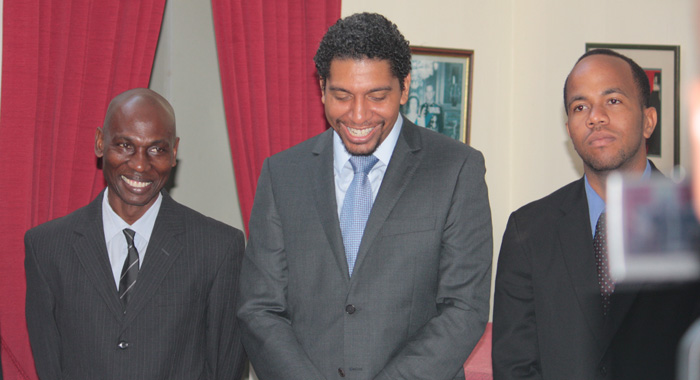 Even before the three new government senators were announced on Monday, Opposition lawmaker St. Clair Leacock was speculating on who they would be and gave his impression of the implications for local politics.

Leacock told supporters of his New Democratic Party (NDP) at a rally in Barrouallie on Saturday that Jomo Thomas, Camillo Gonsalves and Luke Browne would be sworn in as Government senators on Monday.

The three were announced as senators on Monday.

He said that while the NDP is “renewing and refreshing” itself, the ruling Unity Labour Party (ULP) is “quickly and very directly and very openly rejecting their own members.

Leacock said he was reserving comment on Thomas, a lawyer, political activist and commentator, “because time ain’t ready.

“But I want to say something that is important about these changes because you have to understand the psyche of the ULP at this time as they are going out of office.”

He said he has “no disrespect, no dislike, no contempt” for Camillo Gonsalves, son of Prime Minister Dr. Ralph Gonsalves.

The younger Gonsalves was on Monday appointed Minister of Foreign Affairs, Foreign Trade and Information Technology.

“He has a right, like anyone to be in the Parliament,” Leacock said of Sen. Gonsalves.

“But to begin with, he is coming with three bites at the cherry,” he however added.

Leacock said the younger Gonsalves was coming into Parliament as Minister of Foreign Affairs and will replace Clayton Burgin as the ULP’s candidate in East St. George — giving him two bites at the cherry.

He further said that he is convinced that the ULP will lose the next general elections – constitutionally due in 2015 – and would not want to come into Parliament “to face Daniel Cummings (MP for West Kingstown, an opposition lawmaker) and the others on the other side.

“So, I believe he will resign his seat and make room for his son. So, you see the story. Camillo has his one, two, three shots at government,” Leacock said.

He said that this is where Sen. Thomas “comes in too, to be important to the ULP”.

Leacock said Gonsalves has always been “a consummate communist — all about himself and now, in his twilight years, he has to come to grips with a reality”.

The reality, Leacock said, is that every political organisation of which PM Gonsalves has been a part has died after he left.

“So he is struggling to ensure that on his exit from politics the ULP doesn’t die and the one person who can chock step with the communist philosophy and ideology is Jomo Thomas and that is the reason for Jomo Thomas entering the politics at this time, to see that in the ULP there is a continuation of the ideological fervour and the backwardness of ideas that has cemented that party for many years,” Leacock said.

“I am putting that out to you big and bold now. Because, no Jomo to replace Ralph, no ULP. We need not waste time on Luke Browne. That will take care of itself,” he said of the former national scholar who is now Parliamentary Secretary in the Ministry of Tourism, Sports, and Culture.

Leacock said that ULP is now saying to the population what the NDP has always said.

“They have no quality, none whatsoever in the Parliament of St. Vincent and the Grenadines. After Ralph, captain out all man out. Not one single one of them could have carried a debate save and except for seconding a motion.

Leacock said the ULP is bringing the new senators to Parliament in the hope of breathing new life into the party before the next general elections – constitutionally due in 2015.

He said that this confirms that the ULP has no quality, no leadership, no vision, and no ideas to carry the country forward.

4 replies on “Ahead of announcement, Opposition MP weighed in on new senators”