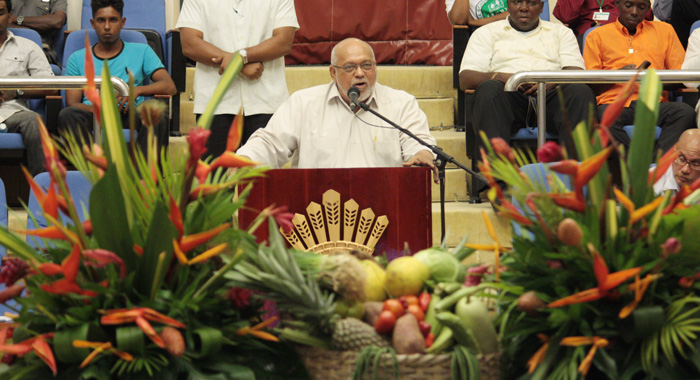 President of Guyana, Donald Romatar, is framed by agriculture décor as he addresses the opening ceremony of CWA 2013. (Photo: Kenton X. Chance)

GEORGETOWN, Guyana — Caribbean Week of Agriculture officially began on Wednesday with a ceremony in which President of Guyana, Donald Romatar, expressed happiness about the efforts being made in the region to reduce food imports and ensure food security.

“I agree … that we can’t supply one hundred per cent of our needs, but certainly we can do far better than we are doing at this point in time. And therefore, I am happy to see that some steps are being taken for us in the region to work on our own food security, which is extremely important for us,” he said.

He said that the only time the Caribbean recognises food security is when there is a disaster.

“And we need not wait for that to happen for us to put our house in order,” Romatar told the region’s premier agricultural event, which brings together stakeholders for a week of activities to promote agriculture and agri-industry via policy dialoguing, learning sessions, and an exhibition showcasing the fruits of the sector.

Some 160 persons are participating in the event, and Romatar said that the large number of participants “tells us that agriculture — in our region at least — is finally getting the recognition that it deserves”.

He mentioned among the global challenges the world faces the question of food.

“And we cannot solve that problem without a good, strong, agriculture in our own region as well.”

Romatar further said that while the region is making progress in fighting poverty, the question of land usage, in light of the competing interests, is also a consideration.

“Agriculture now is not only producing food but very important in producing energy,” he said, adding that challenge will remain for as long as there is a big dependence on fossil fuels and prices remain high.

“And therefore, the direction in which we are going I think is important, because the agriculturalists of today and of tomorrow will have to be much more educated. And this stigma that has affected agriculture for a long time, as being barefooted and in the field and so forth, we know now that a lot more science, a lot more education, is needed to be a successful farmer and a successful producer of food.”

Recognising the increasing importance of education and science in agriculture as vital, Romatar said, increasingly it is necessary to produce more food from smaller areas of land.

“And that’s a big, big challenge. We have facing things like climate change, which causes floods and disasters in some of our smaller countries [and] coastal lying areas and island…”

Romatar also noted that the world’s population continues to grow and now has seven billion mouths to feed, a reality, he said, which makes a focus on agriculture even more important.

“And we are seeing the importance of agriculture to politics,” he said, noting that the unrest in the Middle East in 2011 began when food prices in Tunisia spikes.

“And therefore, it has serious issues to deal with social stability in the society and we have therefore every reason to want to have a strong agriculture in our country, in our region, and in the world for that matter,” Romatar said.

Wednesday’s ceremony also heard speech from high-ranking officials from the agricultural sector in the region and also saw media workers being recognised for excellence in coverage of agricultural issues.

Guyana’s Minister of Agriculture, Dr. Leslie Ramsammy, said he is happy that agriculture is taking centre-stage.

“Agriculture must be the vehicle in which we can guarantee that no child will be born in this region in a food-insecure state, that every citizen, young and old in this region will live in food security,” Ramsammy further said.

“I say that we leave this evening saying ‘I believe,” Ramsammy said, quoting the slogan of a national campaign in Guyana.

“… we believe that Guyana is taking its place in the Caribbean, truly as the breadbasket of this region. We are commitment and we believe — I believe as we all believe — that we do not have to import US$5 billion from outside of the Caribbean. Working together, we can feed our people we can produce all of the food that we need.