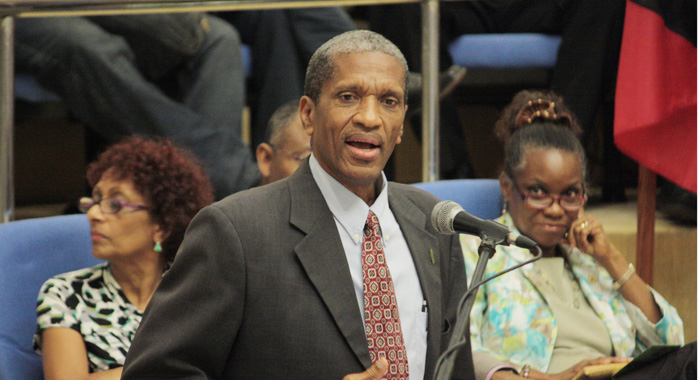 GEORGETOWN, Guyana — Recently appointed head of CARICOM’s Human and Social Development, physician Douglas Slater, has highlighted the importance of agriculture to the health of CARICOM citizens.

Slater, addressing the official opening of Caribbean Week of Agriculture on Wednesday, said it is important that the various sub-sectors are integrated in their efforts so that they can better follow the technical advice being offered.

Slater, who arrived in Guyana earlier this week to take up his position, said that he agrees with Guyana’s Minister of Agriculture, Dr. Leslie Ramsammy that the region can feed itself if it makes the effort.

Slater said that a recent meeting of health ministers discussed the issues of non-communicable diseases.

He said that CARIRCOM brought this issue to the attention of the international community through the Port-of-Spain Declaration of 2009.

“And I urge you colleagues from agriculture to get familiar with it, and especially the part on nutrition, since, of course, you are the ones we depend on to feed our people.”

He told the ceremony that the region must ensure a link between food security and nutrition security.

“Ensuring access to safe and nutritious food to meet dietary requirements and food preferences for an active and healthy lifestyle is equally important,” he said.

“As a region, we must ensure that Caribbean populations are armed with information that will enable them to make the right choices with respect to nutrition.”

He said that data has shown that the rate of non-communicable diseases such as diabetes and Hypertensions are particularly high in the Caribbean.

“The risk of contracting such diseases is greatly lowered if we make the right dietary choices…. As we focus this week on food and nutrition security, let us ensure that in our discussions we keep in mind the need to create that link with production, the overall economic growth of the region and the overall health of our region,” Slater told the audience which including leading figures from leading food and agriculture agencies.

However, Slater, who was minister of foreign trade in Kingstown from December 2010 until August 2013, told the opening ceremony that it is not possible to deliberate regional agriculture matters without dealing with “the still vexing issue of transportation in all its dimensions”.

He said it was timely that CARICOM leaders, at their last meeting, had as a central focus transportation in the region.

Preparatory to that, the Council for Trade and Economic Development (COTED) met to advise on the transportation of agriculture produce, he said.

“The result has been the establishment of a Transportation Commission. Some of the issues to be addressed relate to the high cost of regional air and sea transportation. For example, freight cost between Antigua and Barbuda, and Guadeloupe and Martinique are twice as high as freight cost from France to Guadeloupe,” Slater pointed out.

He further stated that the special COTED meeting on transportation earlier this year agreed that key stakeholders including the Caribbean Shipping Association, regional airline LIAT, producers and exporters meet to discuss the issue of the availability of adequate transportation to move goods from one country to the next.