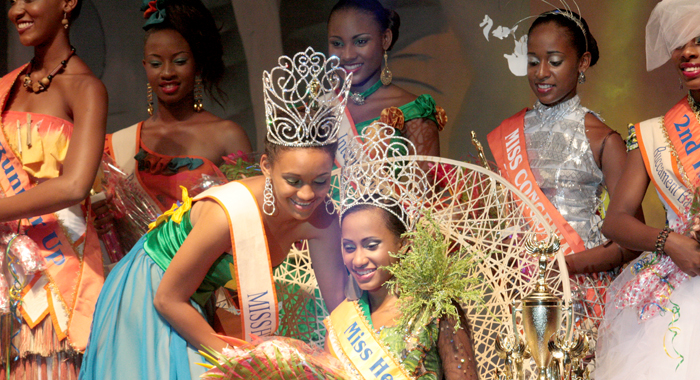 The Girls’ High School delegate, Lateefa Noel, won the Scotiabank National Secondary Schools’ Miss Heritage pageant Saturday night in a show that should cause organisers of and some past contestants in the Miss SVG pageant to hang their heads in shame.

The show demonstrated that it is indeed possible to showcase the beauty — not just physical — of the nation’s females without threating them as sex objects.

It also demonstrated that contrary to what is often the case in Miss SVG, talent and beauty frequently come in the same package.

Noel, a Form 5 student, who went on to win every judged category of Saturday’s show, set herself apart from the other six contestants during the first judged segment — the interview.

The contestants had already had a chance to face the crowd when they made an introductory appearance earlier on.

It seems that organisers of the show had hoped that the chitchat between interviewer Jocinth Elliott and each delegates ahead of the judged question would have helped to take some of the nerves away.

And it did to some extent, although organisers might want to reconsider having the delegate face the interview — often the poorest segment of pageants in SVG — so early in the show, although the thinking might have been to get it over with once and for all, and move on to the “less taxing” parts.

The Girls’ High School-organised pageant came up with an innovative way to reduce the amount of time it takes for the delegate “to pick” the second question — one about the heritage of SVG.

At last year’s Miss SVG, the contestants had to walk from the centre to the edge of the stage to pick a question from a basket there.

However, at the Miss Heritage pageant, the envelopes containing the questions were stored in the canopy above the stage and lowered near the centre to allow the delegate to retrieve a question.

This mechanism ensured literal transparency in how delegate randomly picked a question and reduced the amount of time it took to do so.

Noel, the last of the seven delegates to appear on stage, is regarded as a talented dance. In the judged portion of her interview, she was asked, “What has dancing contributed to your growth as an individual?”

She responded, “Dance is my getaway. Whenever I am very nervous or I am angry or I am just too stressed, I just play my music and I just relax myself because I find that it just calms my nerves, and that’s why I would never ever stop my dancing.”

The delegates also had to answer a heritage question, and Noel was asked, “Some carnival revellers seem to prefer ragga soca to the traditional calypso art form. What would you say to them in support of calypso?”

She responded: “Calypso is more social commentary. Calypso is not only about the beat, but the lyrics of calypso is very, very powerful. Now, I am not saying that reggae does not have powerful lyrics but I just believe that calypso suits us best.”

And if anyone had any doubt about which school made up the largest segment of the crowd at the event, which was organised by the Girls’ High School, the response of the patrons to Noel’s presentation, by this point, should have removed these doubts.

The next judged segment of the show was the ambassadorial speech, a segment in which Noel also distinguished herself with her presentation — that bordered on a dramatization — of the progress that black women have made since slavery.

Saturday’s show was indeed a heritage event, and this theme was present from the singing of the National Anthem by a choral group.

The group went on to sing a medley of traditional songs, transitioning smoothly from “Me nah go back ah Soufriere”, and, among others, “Moonlight poor man’s lantern”, then culminating with Fire Empresses’ “I am ah Vincy” — all sung to the same tune.

However the show also demonstrated an appreciation of the fact that Vincentian heritage is not limited to traditional songs, but also includes genre such as soca and freestyle dancing.

Among the guest performers at the event were reigning soca monarch Skinny Fabulous and a male quartet comprising Akido, Andre, Skarpyan, and Bomani.

The show also included a dance clash between two groups with the audience determining the winners by voting by text message.

Another way in which Saturday’s show distinguished itself from the Miss SVG pageant was in the panel of judges.

Seventeen judges, under the leadership of chief judge, Earl Paynter, made up different panels to judge the various segments of the show.

Each panel comprised persons with different expertise, according the segment of the show that was being assessed.