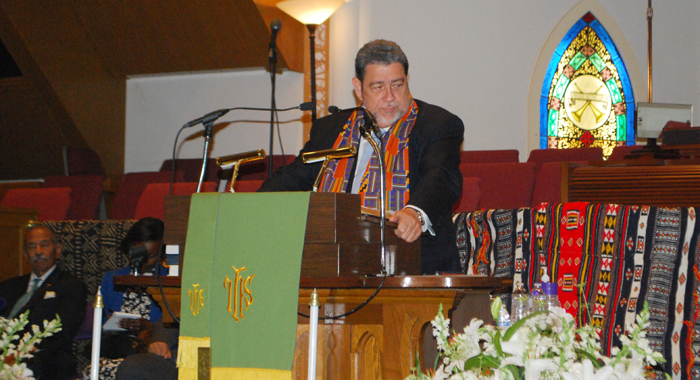 PM Gonsalves delivers the keynote address at the opening of a symposium hosted by Institute of the Black World 21st Century.

WASHINGTON, DC, Oct. 21 — Prime Minister of St. Vincent and the Grenadines Dr. Ralph Gonsalves concluded a successful trip to Washington, D.C, where he elaborated many of the foreign policies of his government to U.S. lawmakers; the executive management of the Organisation of American States; foreign diplomats; U.S. and Caribbean media; and American civil society and the Vincentian Diaspora alike.

The main highlight of his visit was to deliver the keynote address at the opening of a symposium hosted by Institute of the Black World 21st Century (IBW). Also headlining the symposium was former Prime Minister and President of Cape Verde, Pedro Pires. Both world leaders received legacy awards for their distinguished service in fostering Pan-Africanism.

In addressing the theme of the symposium “The Future of Democracy and Development in Africa and the Caribbean”, Gonsalves delivered a masterful discourse on the productive capacity of African nations and the use of its resources.

He elaborated on many of the challenges Caribbean governments facem–in particular, external shocks that torpedo the economies of small vulnerable economies — many brought about by the actions, policies and regulatory regimes of countries of the developed world.

In an address that was exceptionally well received, Gonsalves also discussed the unanimous decision by CARICOM governments to pursue reparations from the governments of the United Kingdom, France and The Netherlands, for native genocide and slavery. He tied the under-development of our nations to the consequences of genocide and slavery and emphasized his conviction that the former European colonial powers have a moral and legal responsibility to redress the egregious wrongs of the past by playing a greater role in the 21st century development of our people.

The Prime Minister’s trip to Washington also included a meeting on Capitol Hill where he was received by Congressman John Conyers, founding member and Dean of the Congressional Black Caucus (CBC). The U.S. lawmaker, who later attended the opening symposium to hear the feature address by Gonsalves, exchanged views on the scourge of under-development in Afro-descendant communities brought about as a direct consequence of slavery and the ensuing racial discrimination. Representative Conyers, who has been a member of Congress for 48 years, is also the sponsor of a Bill in the United House of Representatives, calling for the United States government to acknowledge the fundamental injustice of slavery in the U.S., its impact as manifested by racial and economic discrimination against Afro-descendants and for the U.S. government to undertake appropriate remedies.

He expressed his intention to extend an invitation on behalf of the members of the CBC to Prime Minister Gonsalves, to return to Washington D.C. next year to address the CBC’s Legislative Conference.

The Conference, held annually, brings together Black U.S. lawmakers and relevant stakeholders to discuss policies and to find concrete solutions to matters of significance to the Black community.

The Prime Minister was also invited to give several interviews to various media houses. He used the opportunity to educate the public on his government’s and CARICOM’s views on reparations. In light of these interviews, prominent civil rights activist, the Reverend Al Sharpton has, through his spokesperson, already signalled his interest in speaking with the Prime Minister on the issue.

Gonsalves was accompanied to his various meetings by St. Vincent and the Grenadines’ Ambassador to the United States and Permanent Representative to the OAS, La Celia A. Prince and diplomatic staff members at the Embassy in Washington.

(Embassy of St. Vincent and the Grenadines to the United States of America)

4 replies on “PM Gonsalves wraps up successful trip to Washington”