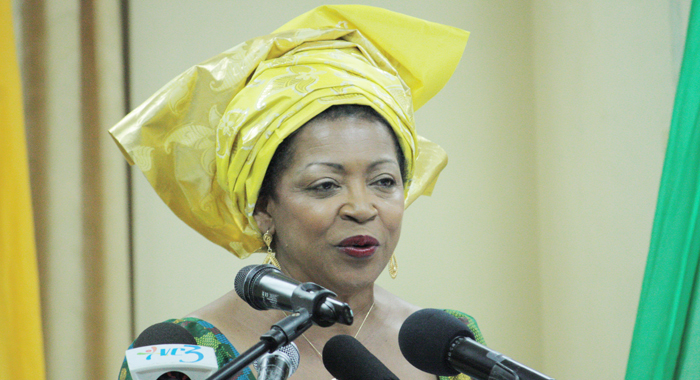 Professor Verene Shepherd has criticised CARICOM for failure to support a proposed Decade of People of African Descent. (IWN photo)

A leading Caribbean intellectual has criticised the Caribbean Community (CARICOM) for doing little to help to drum up support for a proposed Decade of People of African Descent.

“Sadly, CARICOM has done very little to advance the project at the United Nations, where the proposal is still languishing,” Professor Verene Shepherd of the University of the West Indies (UWI) said Tuesday night as she delivered the Annual Independence Lecture, organised by the UWI Open Campus.

“But so far, there has been little action by CARICOM countries to help to drum up support for the Decade and little awareness in the region about it,” she said.

She said that as far as she is aware, while practically every Caribbean leader who spoke at the UN General Assembly last month defended reparations for Caribbean slavery and native genocide and opposed the US trade embargo against Cuba, only the Prime Minister of Jamaica, Portia Simpson-Miller, publicly supported the Decade.

“This is ironic; for the delay in the declaration of the Decade of People of African descent by the Untied Nations is attributable to the refusal of those who crafted the programme of action for the Decade to remove references to reparation and make it less visible,” Shepherd said.

Shepherd, who is the head of the Reparations Commission in her native Jamaica, spoke on the topic: “CARICOM and the Decade for People of African Descent: A Post-Independence Imperative”.

CARICOM’s silence on the Decade, she said, is reminiscent of the virtual silence on its forerunner — the 2011 International Year of People of African Descent, “mostly ignored by the Caribbean, but embraced by others in GRULAC” — (Group of Caribbean and Latin American States).

She noted that the UN General Assembly in 2009, at the urging of states like Columbia and Guatemala, proclaimed 2011 the International Year of People of African Descent.

Shepherd further quoted the UN Secretary General, Ban Ki-moon, as saying that the aim of the International Year was to “strengthen national actions, and regional and international cooperation for the benefit of people of African descent in relation to their full enjoyment of economic, cultural, social, civil and political rights, their participation and integration in all political, economic, social and cultural; aspects of society, and promotion of greater knowledge and respect for the diverse heritage and culture…

“Those who proposed and subsequently endorsed the International Year of People of African Descent recognised that people of African descent have been victims of racism, structural discrimination and enslavement for centuries. That in many countries, their access to opportunities in education, health, employment and justice is still inadequate. So there is great need for various concrete special measures,” Shepherd said.

She noted that at the launch of the International Year, the UN Secretary-General said, “The international community cannot accept that whole communities are marginalised because of the colour of their skin.”

Shepherd said that only Guyana had an official, as opposed to a civil-society type, launch of the International Year.

“There was the usual high level of scepticism around the usefulness of an ethnic-specific year,” she said.

She mentioned an article titled “Frankly Speaking: Another International African Event” by A.A. Fenty, published on June 25, 2010 in a newspaper in Guyana.

According to Shepherd, the article questioned why the UN thought it “appropriate and/or timely to designate 2011 the year of Africans

“Are not People of Colour, including Africans, the majority on the Planet? Do these ‘years’ and observances really achieve anything significantly lasting for the subject — in material, substantial, psychological or mental sense?” the writer further stated.

Shepherd said these are “questions that are no doubt being posed in relation to the proposed Decade — as far as there is any public knowledge about it”.

She said that while the reason for CARICOM’s scant attention to the Decade is unclear, it could be due to “our apparent discomfort with discussing ethnic-specific activities in our so-called harmonious, Creole or multicultural societies, especially when the ethnic group in question is African/African Caribbean.

“I also gather that some Caribbean people and governments believe that there is no need to focus in any special way on people of African descent in a region where, in most countries, they are in the majority; where they supposedly enjoy all rights and freedoms and are free from discrimination on the basis of race or ethnicity,” Shepherd said.

“Such focus, some argue, should be placed on people of African descent in countries where they are in the minority and face international discrimination,” she added.

“In fact, where report stated boldly that any honest diagnostic assessment will show that ‘although states have recognised the persistence of racism and racial discrimination in the region and have begun to address them, persons of African descent are still victims of structural discrimination’.”

The lecture forms part of activities to mark this country’s 34th anniversary of Independence — on Sunday, Oct. 27.