Scientist says land degradation should be a priority in SVG 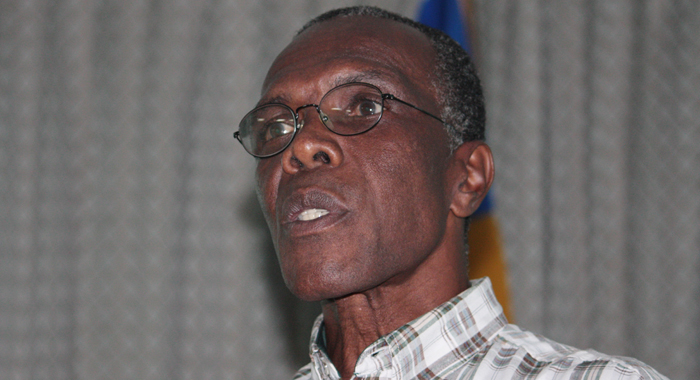 A local environmental scientist has called for land degradation to be made a priority issue here.

Dr. Reynold Murray last week decried the absence of “national champions” of land degradation issues both at the community and ministerial levels.

“You know what is strange … is that you spend a lot of money addressing land degradation issues …, but you just haven’t brought the pieces together,” he said on Thursday during a two-day United Nations Convention to Combat Desertification (UNCCD) National Action Programme workshop at the Ministry of Foreign Affairs Conference Room

“You have extension officers, you have a Forestry Department that is doing trails, etc. They have the resources. What you need to do is to put the pieces together so that it becomes functional,” Murray said.

He told participants that the flooding of Georgetown in April 2011 is not as strange as it seems.

The disaster, according to Murray’s explanation, was also not all natural.

Heavy rains in the heart of the dry season that year resulted in the flooding of the town on St. Vincent’s north-eastern coast.

Making a presentation on the “Status of Land Degradation in St. Vincent and the Grenadines”, Murray said it is important that persons understand the nation’s soil types.

“… that flood that they had, it looks so complex to people ,but it is not a complex flood. It is very simple,” Murray said.

He explained that to the back of Georgetown where bananas were cultivated, the soil is very loose.

“… you can pretty much pick up the soil and run it through your hands like that.

“Now there are no bananas up there, the drains, large drains, that they had maintaining during the banana production period and the feeder roads, are no longer open. They are filled with sand. So, when the rain came, where was the water going to flow?” he said.

Murray said that in the absence of drains, the loose soil was easily transported and resulted in the flooding of the town.

“So, it is a matter of soil type that is part of the problem in terms of our erosion and the loss of fertility in St. Vincent and the Grenadines. So, we have to work assiduously to maintain the fertility of the soil, to keep the vegetation cover in order to prevent erosion,” he said.

“Soil degradation is mainly a factor of our misbehaviour in this country. So, you need to be aware of that…” Murray said.

He said poverty has been identified as one of the major cause of land degradation in SVG.

“The increased unemployment associated with loss of preferential treatment in the Banana Industry has lead to reduction in foreign exchange and a shift towards less productive and sustainable utilization of the land, such as charcoal burning and shifting agriculture.”

Murray said that poverty also contributes to land degradation in the sense that persons who had little or no means try to exist on marginal lands.

Among the other contributor to land degradation, Murray mentioned poor agriculture practices, including removal of contour barriers, mono-cropping, down hill tilling on steep slopes, and abuse of chemicals.