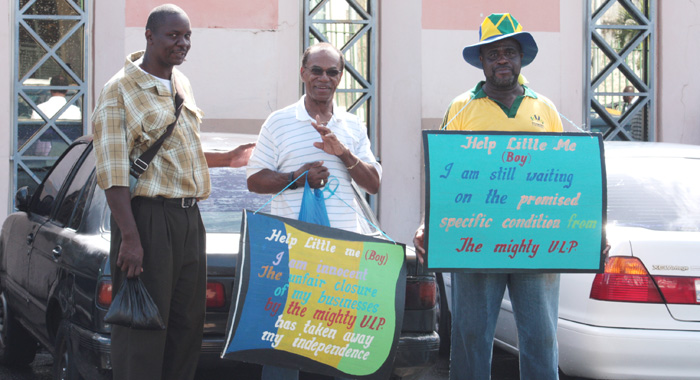 Activist Frank Da Silva on Tuesday joined businessman Leon “Bigger Biggs” Samuel in picketing outside Parliament against what Da Silva described as “a grave injustice” against the entrepreneur.

Samuel has been trying since February 2011 to get the Government to reinstate his licence to mine aggregates at Rabacca.

Citing environmental impact and violation of the terms of his license, the State revoked Samuel’s permit almost three years ago.

Samuel has said that the decision has led to the closure of his EC$7 million block-making operation.

He has been taking several steps to keep the issue in the eyes of the public even as he engages the various State agencies.

On Sunday — Independence Day — Samuel and his two daughters staged a silent picket at Victoria Park in Kingstown, where the Military Parade to mark his country’s 34th anniversary of Independence was held.

On Tuesday, Samuel picketed outside the House of Assembly building, while Parliament was in session.

Samuel told I-Witness News that following a statement by Prime Minister Dr. Ralph Gonsalves to Parliament in August, he met with the Planning Board on Sept. 26.

Gonsalves told Parliament in August that his Government has concluded that mining can recommence at Rabacca but Samuel has refused to meet with Chief Engineer, Brent Bailey, to discuss the terms.

Samuel told I-Witness News of the outcome of his subsequent meeting with the Planning Board.

“All they did, they listened to the presentation that me and my technical committee had to make and that was it. Nobody has contacted me from since then on again,” Samuel said.

He said he thinks enough time has passed to allow the Board to come up with the specific terms.

Meanwhile, Da Silva a radio personality and activist, said that Samuel’s issue “should never have taken place in the first place.

“All the information supplied by those people where false, and here you have an issue where over 60 employees [are] out of work. You figure out, each of those persons with an overage of over three persons in their family; what happens?” Da Silva said as he held one of Samuel’s placards Tuesday afternoon.

“This has got to be a joke. It should not have begun and it should have ended a long time ago. And it is time for it to end,” he said.

Asked how he knows that the information on which the Planning Board acted was “false”, Da Silva said:

“Because I went there, and furthermore, I made the same determination as an engineer…

“Let me ask you a question, how can ground water — you are almost on a beach — be contaminated by what? That is already salt water. That is a total impossibility.

“If you go out there and you park up a vehicle and it has a little leak, what are you going to do with that? How is that going to contaminate any water in the first place? That out there is seawater, we ain’t using that for nothing,” Da Silva further said.

“I went there and I saw the extent of the spill. It was no spill; you park up heavy equipment, you must get a little drip. It was absolute nonsense,” he said.

He further noted that while Samuel’s licence was revoked because of environmental impact, thousand of tyres are burnt on the other side of the river.

“On the other side of the river thousands of tyres were being burnt by the Government. So what foolishness they are talking now?” Da Silva said.

He said the decision to revoke Samuel’s licence was motivated by politics.

“It was purely political and I got all the tapes to say the whole thing was inspired by a [a politician]. He kept attacking the man during the [2010 election] campaign. I got the tapes,” he said.

“Stupid politics! But listen to me, in this day an age, we have to put those things aside. You have [calypsonian] The Man Age signing we have a country to build and yo’ put aside this and yo put aside that, and you taking steps to put people out of work?

“There was no justification whatsoever for Bigger Biggs to close down. None! None whatsoever! And they are saying they gave him an all-clear. How they give him and all clear and he can’t get an all clear? Where is it? It is foolishness,” Da Silva said.

Correction: The meeting between Samuel and the Planning Board took place on Sept. 26., and not Sept. 6, as stated in an earlier version of this article.