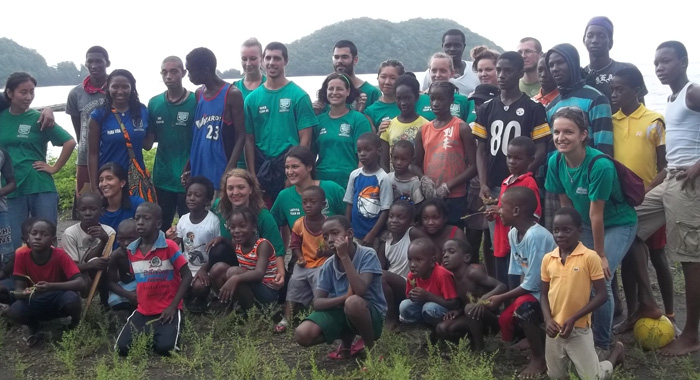 Participants pose for a photo after the Bin It Clean-up Campaign at the Fitz Hughes beach on holiday Monday.

Residents of North Leeward were all smiles when a group of youngsters took part in the “Bin It Clean-up Campaign” at the Fitz Hughes beach on Monday.

The event was a part of activities to mark this country’s 34th Anniversary of Independence and was spearheaded by the Generation Next youth organisation in North Leeward.

The group partnered with the Solid Waste Department and the Richmond Vale Academy to host the event under the theme “Keeping SVG Clean, Preserving Our Future.”

Terranza Franklyn, one of the co-ordinators of the programme, said the campaign was primarily aimed at promoting environmental conservation in North Leeward.

“A number of youth in the community participated in the clean-up and at the same time they learnt some basic environmental conservation techniques so we are pleased with their effort,” Franklyn said.

Participants comprised a number of youth groups in the Chateaubelair district and the members of the Richmond Vale Academy.

Generation Next is a recently formed youth organisation in North Leeward. Its aim is to empower young people through a number of youth-centred activities including fundraising, community projects, workshops, mentorship programmes and other initiatives to further develop the minds and skills of our youth.